A strategy to stop asylum seeker boat arrivals is at the top of Tony Abbott’s to-do list for next week after his ministry is sworn in. 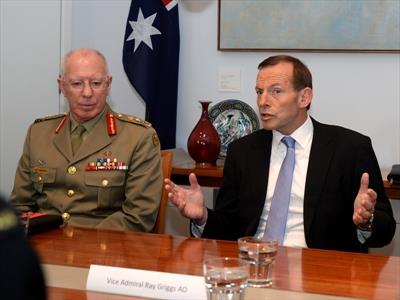 PRIME minister-elect Tony Abbott is expected to lay out his “stop the boats” plan next week, after the swearing in of his new frontbench.

The Abbott government’s border protection strategy – codenamed Operation Sovereign Borders – will be led by a three-star general, who is yet to be named and could be a two-star officer from the army, navy or air force promoted into the new role.

It is expected Mr Abbott could visit Jakarta just before attending the APEC leaders’ forum in Bali from 7-8 October.

Mr Abbott has made it known his border protection policy will be the first cab off the rank after his new ministry is sworn in early next week.

The policy is expected to include escorting boats back to Indonesian waters where it is safe to do so, toughening visa conditions and offshore processing.

“Our armed forces are certainly not large by international standards but they are universally admired as being as good as anyone in the roles that we play and that is very much to your credit,” he told the chiefs.

“I hope you will let your services know that the new government wishes to work in ways which will respect their professionalism and which will improve their capabilities.”

Mr Abbott is also putting the finishing touches to his frontbench, which could be announced at the weekend before being sworn in early next week.

He has already signalled there won’t be major changes from his shadow ministry lineup.

One frontbencher whose position is in doubt is Sophie Mirabella, who could lose her Victorian seat of Indi.

If veteran MP Bronwyn Bishop is elected Speaker, she will also create a vacancy.

Climate change policy is also the subject of talks with the public service, with multiple layers of environmental and industry bureaucracy likely to be shrunk.

Mr Abbott has yet to make a decision on where he will live, but Sydney’s Kirribilli is the more likely choice while The Lodge in Canberra undergoes lengthy maintenance and renovations.

Two asylum seeker boats have arrived since Saturday’s election with a total of 149 people on board.

They were intercepted on Sunday near Darwin and Christmas Island. – AAP