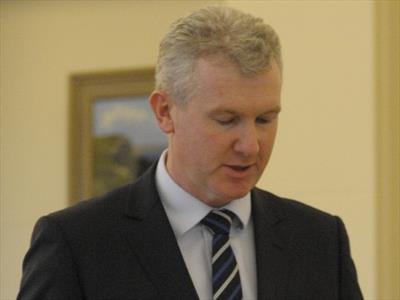 KEVIN Rudd has accused Opposition Leader Tony Abbott of seeking to undermine the tough message to people smugglers in the escalating war of words over the government’s PNG solution.

Mr Abbott says Prime Minister Rudd is being misleading “to the point of dishonesty” in claiming his PNG plan would send asylum seekers there with no prospect of ever reaching Australia.

Initially caught flat footed when Mr Rudd announced the plan on Friday, the opposition has since gone on the attack, citing a wide range of concerns.

But Mr Rudd was unconcerned.

“Mr Abbott is out there deliberately undermining the government’s clear message to people smugglers,” he said.

That was not in the national interest, although it might be in Mr Abbott’s personal political interest, he said.

Attorney-General Mark Dreyfus said the Liberal Party was desperately trying to undermine the arrangement with PNG “simply because it suits their political interests for the boats to keep coming”.

While Mr Abbott says the plan was held together by sticky tape, PNG prime minister Peter O’Neill says the projects Mr Rudd agreed to fund in exchange for the deal have not been costed.

“But I cannot just simply give you a figure that is imaginary.”

He also said he did not know where asylum seekers would be resettled.

“We’ll get there when we start processing them.”

Mr O’Neill declined to nominate an upper limit to the number of asylum seekers he expects to be processed in PNG.

But with Labor doing well in the polls, Mr Rudd had no trouble selling his PNG solution to his own MPs, although some expressed concerns about this radical change at Monday’s caucus meeting in Sydney.

He told MPs it was the right way to deal a fatal blow to the people smuggling industry.

Although actual transfer of asylum seekers to PNG is weeks and perhaps months away, the first concrete step in the new policy was taken on Christmas Island on Monday.

Officials advised 81 Iranians who arrived on boats over the weekend they would never be permitted to settle in Australia.

The government has faced a blizzard of condemnation from refugee groups and others who protested noisily outside the Sydney caucus meeting.