Artists, jurists, academics and sports legends have been honoured on the Queen’s Birthday list, released in Australia on Monday. 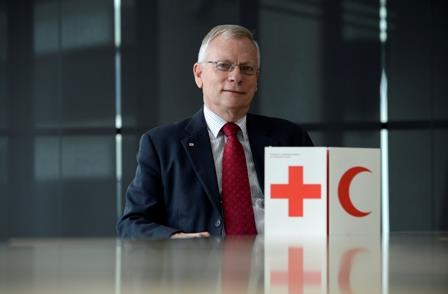 Chairman of the Red Cross International Standing Commission, Gregory John Vickery, has been appointed an Officer of the Order of Australia (AO) in the 2013 Queen’s Birthday Honours List (AAP Image/Dan Peled)

The former Icehouse frontman – whose 1989 homage to the Outback has been used in films, tourism campaigns and corporate promotions – is one of 582 Australians on the 2013 honours list.

The top honour, Companion in the Order of Australia (AC), went to two eminent Australians.

Professor James Crawford is a leading jurist, academic and author who was the first Australian member of the United Nations International Law Commission.

He has appeared in more than 40 cases before the International Court of Justice and other international tribunals and is a respected source of advice to governments on issues from the fight against whaling to recognition of Aboriginal customary law.

Professor Jill Ker Conway, who grew up in outback NSW, has written over 20 books on topics from feminism to the environment and her classic memoir The Road from Coorain, spent over a year on the New York Times bestseller list.

Named Time magazine Woman of the Year in 1975, she has served on the corporate boards of Lend Lease, Nike, Colgate-Palmolive and Merrill Lynch and played leadership and philanthropic roles in a number of North American colleges and universities.

Another influential woman, former ACTU chief and federal MP Jennie George, has been appointed an Officer (AO) in the General Division, while parliamentary colleague Petro Georgiou was similarly honoured.

Gregory John Vickery has been appointed an Officer of the Order of Australia (AO) for distinguished service to the international community through leadership and governance of humanitarian aid organisations. Mr Vickery has worked with the Red Cross for more than 40 years, and is now chairman of its international Standing Commission.

Among the Members (AM) in the General Division was composer Davies and key figures in Queensland politics and government, including former Nationals leader Mike Horan and former top public servant, Bob McCarthy, as well as former West Australian Labor leader and minister Jim McGinty.

In the arts field, figurative painter and philanthropist Robert Dickerson and sculptor-photographer Fiona Hall were appointed Officers (AO) in the General Division.

Dr Gabi Hollows, who with her late husband Fred led remarkable work in treating indigenous Australians with serious eye conditions, was honoured with an AO.

Among the finance sector figures honoured was former Australian Industry Group chief and now central bank board member Heather Ridout, who was made an AO for her contribution to development of economic and public policy. – AAP