20 asylum seekers dead after boat sinks on way to Australia 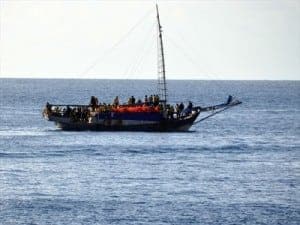 POLICE say 20 people, mostly children have died and many are missing as an Australia-bound boat sinks off Indonesian coast.

“Local people found 20 dead bodies floating in the water, most of them are children,” said Warsono, a police official in Cianjur district of West Java province on Indonesia’s main island of Java.

He added that the boat was believed to have been carrying 120 people, and that 25 adults had so far been rescued alive.

The passengers, said to be from Jordan, Lebanon and Yemen were on route to the Australian territory of Christmas Island.

This incident comes after the Australian Navy intercepted another asylum boat earlier on Friday, and returned the passengers to Java.