Life is full of goodbyes, but after living the expat life in London for a few years, bidding farewell to the city where you've made so many memories can be the hardest goodbye of all. 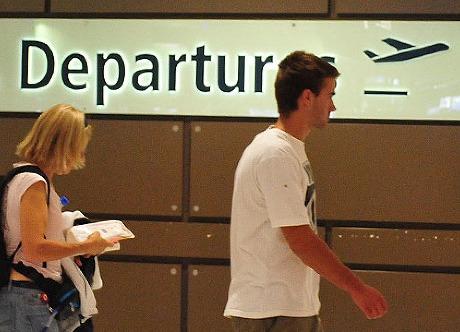 LIFE’S full of goodbyes in one form or another; we’ve just said goodbye to another year. For me, my life has been filled with farewells as I’ve come and gone to different places. I’ve learnt that they never get any easier.

My first proper goodbye was as a shy, fresh-faced 17-year-old with a backpack stuffed with my old teddy, Honey, because I couldn’t (ahem) bear to bid farewell to him, as I headed off on a student exchange to Canada. Having not been separated from my parents for more than two weeks since birth, this was both thrilling and terrifying, and I’ll never forget pressing my nose against the airplane window on the runway, tears fogging up the glass, trying to catch a glimpse of them waving in the departure lounge before I flew halfway around the world to live with a family I’d never met.

Leaving Brisbane, Queensland, after university for a job at a magazine in Sydney was a rushed affair; I had a week to pack up my things and say goodbye to uni friends and a life in thongs and denim cut-offs.

The move from Sydney to London, while tinged with sadness at saying goodbye to friends and family, left me charged and crackling with excitement: the thrill of living in one of the world’s biggest cities, with all of Europe on its shiny doorstep, dulled the pain of any farewells. I’d be back in a year after a few whirlwind Contiki tours, anyway, surely?

Five-and-a-half years later, I’m facing one of my saddest goodbyes yet: not only to some dear friends, but also to a city I’ve fallen in love with. As an expat in London, friends and family have come and gone; I’ve learnt that waterproof mascara is mandatory before heading to Heathrow Terminal 3. I’ve choked back tears watching Mum and Dad fly back to Australia, knowing they’ll be a 25-hour flight away (it’s gone the other way, too; after sun-soaked Christmases at home, I’ve sobbed all the way to the airport at the thought of going back to my grey-clouded, family-less London). I’ve said ‘see you back in Aussie’ to fellow compatriots, where you have a special bond that only exists between expats; a taste of home in each other. I’ve dropped fat, sloppy tears onto a boyfriend’s shoulder when he and his expired visa had to leave the UK (unfortunately my love for London proved to be stronger than the love in our relationship).

But this last goodbye is an especially sad one because I know, unlike my friends and family back in Australia, I may never cross paths with a lot of my mates here again. Oh, I’m sure that with many of them we’ll probably keep in touch at first: cards and letters, even; emails and texts bubbling with chatty, ‘miss you’, banter, finally dwindling down to the occasional Facebook wall post and them liking my Instagram beach snaps, and then nothing much at all. But there will be a few that will stand the test of time and distance; that, when I see them again one day, we’ll pick up exactly where we left off. Maybe that’s the greatest test of a true friendship.

Sometimes, for an expat, leaving the country that’s been your temporary home is the hardest farewell of all. Although I’ve had a love-hate relationship with London (4pm sunsets in winter; queues longer than the Nullarbor Plain), London’s always shone for me, even under a dull January sky: its seeped-in-history charms, melting pot of cultures, treasured-stuffed museums, 24-hour buzz, summer Pimm’s in the park… and the best pubs on earth. Not to mention the Brits with their warm, witty, self-effacing wonderfulness. (Yes, even when the Ashes are on.)

I’ll probably shed a Thames full of tears in the weeks before I leave in London. Maybe there really is no ‘good’ in goodbye. But the hellos to my family, old friends (including, Honey, of course; I decided to leave him this time) — as well as the start of a new chapter — will make up for a hell of a lot of it.

As Jack Kerouac wrote in On the Road: “What is that feeling when you’re driving away from people and they recede on the plain till you see their specks dispersing? It’s the too-huge world vaulting us, and it’s goodbye. But we lean forward to the next crazy venture beneath the skies.”