This week Maze Grill’s Head Chef Chris Arkadieff shows us the secret to locking in flavour — baking your dish in a delicious salt crust.

by Chris Arkadieff
in Lifestyle 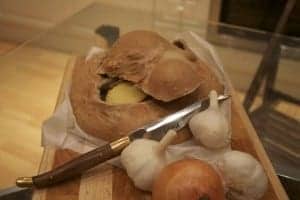 BAKING in salt involves burying food in a sand-like mixture of salt and egg white. The salt insulates the food, cooking it gently and evenly. The technique of baking ingredients in salt has been around for centuries, and is used to enhance the flavour of vegetables and fish.

This week we will prepare a salt baked celeriac, which will hold centre stage on the table. This dish is perfect for sharing and produces a flavor which is hard to beat.

The salt crust dries out under the heat of the oven and forms a baked clay-like cocoon, protecting and locking in the flavours of what’s inside. Mix in a generous handful of fresh herbs such as rosemary and thyme to add extra flavor to the dish.

When the dish comes out of the oven crack open the hardened, golden salt shell to unearth the buried treasure. This cooking method can be used on fish, potatoes, game and fruits. The crust recipe remains the same but the cooking times need to be adjusted depending on what is inside.

Celeriac baked in a salt crust