Australian actor Chris Hemsworth has accepted the Ice Bucket Challenge along with his brothers Liam and Luke – raising awareness for the debilitating disease ALS. 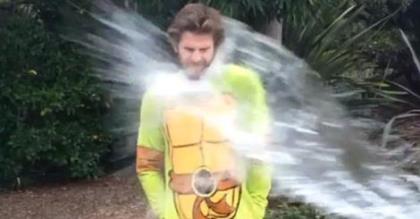 The Australian actor and Thor star took part in a fundraiser in the Costa Rican jungle. He missed the initial 24-hour time frame in which to accept the challenge posed to him by fellow Avengers star Robert Downey Jnr but promised to make a donation to the worthy cause.

Hemsworth displayed his manly muscles as he shook off the icy water (below) and nominated fellow actors Jeremy Renner, Mark Ruffalo and Chris Evans to accept the challenge too. His brothers Liam and Luke Hemsworth also took the challenge – Liam sporting a rather fetching Teenage Mutant Ninja Turtles costume (above). 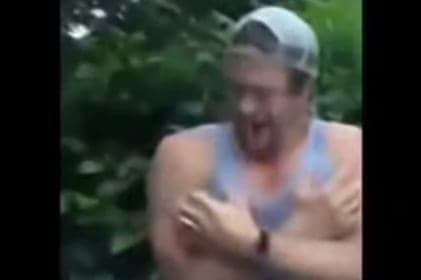 According to Time magazine, more than US$15 million has been raised for the cause which has also emaciated former South African rugby superstar scrum-half Joost van der Westhuizen.

Time magazine said: “The extremely viral ALS Ice Bucket Challenge has led to record donations to the ALS Association, raising some $15.6 million in contributions to the group and its national affiliates since July 29 — compared with less than $50,000 in the same period last year.”

“The total has been boosted by a flood of celebrities participating in the Ice Bucket Challenge, in increasingly creative ways. Project ALS, another charity dedicated to combatting Lou Gehrig’s disease, said it experienced a surge in fundraising after Ben Stiller and Ricky Gervais took the challenge and asked people to contribute to that organization specifically. The charity raised $96,000 over a single weekend, compared to just a few thousand dollars in the first weeks of August 2013.”

Reports are that the ALS 2012 fundraising campaign raised US$19 million in contributions during the entire year, while it managed to raise US$96,000 in just a few weeks during this year’s awareness drive.

Costa Rica seems to be a celebrity hotspot for the Northern Hemisphere summer with Hemsworth’s hunky brothers, Liam and Luke, also taking a time out in the Central American country. The Hemsworths arrived shortly before Academy Award winner Matt Damon left the tropical paradise.

Watch the compilation video of all three Hemsworth brothers taking the ALS Ice Bucket Challenge, above.