Prime Minister Tony Abbott has once again gotten backs up when he used his speech at the D-Day commemorations to advocate his government's policies. 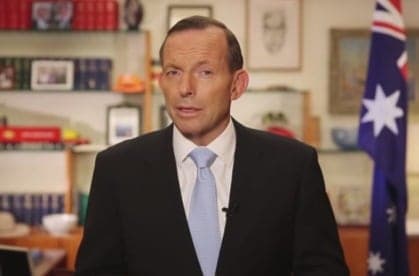 Making a speech on a video released on Sunday afternoon the Prime Minister began by making a profound statement that the D-Day landings had changed the course of human history.

But only seconds later Mr Abbott turns his D-Day speech, that started so well, into an opportunity to advertise that Australia is ‘open for business’ to overseas investors.

After making use of the available air-time to assure the nation of the government’s commitment to repealing the carbon tax and the mining tax he effortlessly returns to his D-Day speech.

“The United States, Canada and France are long standing friends. We stood together at D-Day, we trade every day and we have always shared a commitment to democracy, to enterprise and to people’s right to be free,” says Mr Abbott in the video.

The video which aired on Sunday was met with severe criticism by the Labor Party and the Australian Greens.

Christine Milne, leader of the Greens, on Monday branded the video as “appalling”.

The Labor Party going so far as to say that Mr Abbott was, ”unsuited to the office of Prime Minister”.

Political commentator, George Megalogenis and comedian Charlie Pickering lashed out at the Prime Minister on Twitter for his conflicting messages and lack of observance of the importance D-Day’s 70th commemoration.