Teenager accused of shocking racist rant attack against train guard in Australia has apologised after video of the incident went viral. 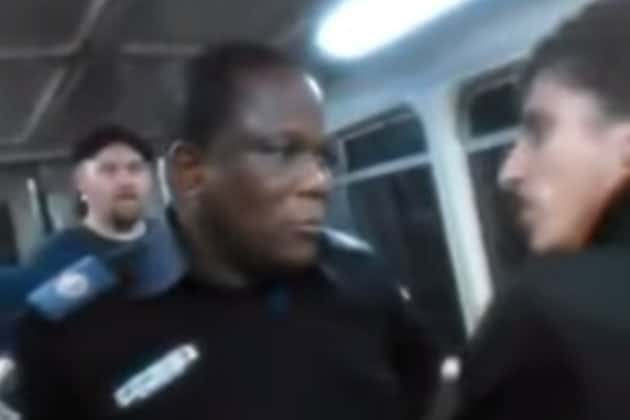 A teenager accused of racially abusing a train guard in an attack, which was filmed and posted on social media, has appeared in court.

The video of the racist rant, which occurred on a Brisbane commuter train, went viral over the weekend and has appeared on the nation’s major news bulletins.

It is just the latest in a spate of verbal racist attacks filmed on Australian public transport.

In the latest video, an apparently drunken young man unloads a shocking and expletive ridden tirade against the train guard after being told to take his feet off the seat.

“If you want to be a security guard, learn some English first, the man tells the guard.

Then, in one of the most shocking outbursts, the young man says, “This nigger comes to into my country and tells me to put my feet off the seat, when my feet are on the fucking newspaper, you fuckin’ black dog, as the person filming the incident laughs.

The agitated young man then proceeds to challenge the guard to a fight. When fellow passengers interject, the man threatens them as well, before the train guard bravely puts himself between the drunken man and the other commuters.

The person filming eventually leads his friend off the train.

17-year-old Adbel-Kader Russell-Boumzar was subsequently charged over the incident, along with the person filming, and appeared in a Brisbane court on Monday.

After being released on bail, to appear again on November 3, Russell-Boumzar told awaiting reporters that he was sorry for his behaviour.

“I would like to give an apology to the bloke on the train and to everyone that was offended by my video, he said.

He added that he had felt “very bad about the attention the video, which he apparently uploaded himself to Facebook on Friday, had received.

When asked why he posted the video to social media, he replied, “Oh, I didn’t mean to.

According to 7 News, Russell-Boumzar became apologetic after the video received a barrage of derision from other social media users.

“I almost ALMOST stopped watching before the decent people stepped in. So glad I didn’t have to watch this ugly Australian go unchallenged,” commented one user.

On his Facebook account, the purported offender said , “I’m really sorry to everyone that was affected by the video I really can not remember anything out of all honesty the post made before was someone else I know this is no excuse.”

“But can you all see from my point of view that I was a f***ing idiot and I’m really sorry.”

He reportedly also said in the Facebook comments: “but I am proud to be white!

The video even attracted condemnation from the premier of Queensland and Australia’s prime minister, who labelled the incident “un-Australian.

“I think he, from what I could see, responded very professionally in what was a very difficult situation.”

Queensland Rail (QR) has also congratulated their worker while deploring the actions of the commuter.

“We are disgusted at the anti-social behaviour of this passenger towards one of our contracted security guards,” QR said in a statement.

“We strive to provide a safe workplace for our people and to see this occur is appalling.”