Following the airing of INXS: Never Tear Us Apart, the band's greatest hits album has hit the top of the Australian album chart at #1. But what are the 5 best INXS songs?

by Bryce Lowry
in Entertainment, Lifestyle 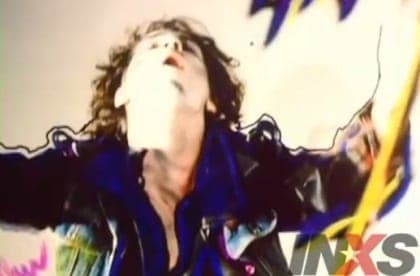 INXS are Australia’s greatest ever rock export. What are their top 5 songs?

INXS: Never Tear Us Apart, Channel 7’s story of Michael Hutchence and Australia’s most successful rock band, has taken Australian TV audiences by storm. Feeding the hype, radio stations around the country are re-discovering the fantastic INXS back catalogue — and some absolute cracker tunes there are. This week, INXS: The Very Best is sitting pretty at #1 on top of the ARIA album charts with Kick close behind at #7. But what are the 5 best INXS songs?

Global fans mostly know INXS from their superb 1987 worldwide smash hit Kick album – and particularly the outstanding songs from it ‘New Sensation’ and ‘Need You Tonight’ — onwards (did I say Rock Star: INXS? No, I didn’t). But for Australians that was the band’s peak. Kick and the five albums prior to that represent the true INXS canon for Aussie fans. It was 1982’s Shabooh Shoobah, 1984’s The Swing and 1985’s Listen Like Thieves that, while certainly attaining a notable level of cred and chart success in the US and the UK, elevated the band to the top of the Australian music tree, making them the undisputed kings of Oz Rock.

It was during that period that INXS melded the exciting new sounds emanating from overseas with the hard-nosed blood and sweat of the 80s Oz Rock scene (also see: Andrew Farriss — The Rock of INXS [interview]). The result was a sound that took it to the greatest American and British artists of the day in style and sophistication — complimented visually with some ground-breaking videos directed by Richard Lowenstein – but was still uniquely Aussie and in a way that no other Australian band could quite muster at the time. The culmination was Kick and complete world dominance. INXS made us Australians proud and proved to every Aussie act since that conquering the world was indeed possible.

Most home-grown fans would, I think, find it hard to disagree with this list (if you do, give us yours in the comments section below) and for those beyond Australian shores who may have largely missed the true best of INXS, here’s a few you may know and some others you may not but that are, naturally, what you need.

The one that properly introduced INXS to mainstream global audiences. Their best video too (Hello, Mr Lowenstein), which MTV lapped up, propelling the song to #5 on the US Billboard chart making it the band’s first Top 10 hit there. Bold, fresh and still thrilling.

Michael Hutchence and the boys find their groove. Shabooh Shoobah marked INXS’s evolution from mediocre pop/punk/mod mulch to top-notch, dark and downright sexy new-wave. ‘Don’t Change’ was the biggest hit from the album (which must still rank amongst the most bizarro album titles ever), and a first introduction to the band for many Aussies. ‘To Look at You’ was far and away the best song on it, though.

This song and ‘Kiss The Dirt’ best typify the sound that made Australia fall in love with INXS — like the country; big, rich, warm and dusty. The video shows the band slogging it out on the road in Australia’s North Queensland then landing in London, on the cusp of greatness. The keyboard-led release sends that tingle down the spine… you know the one.

The first single from their debut album, it went Top 40 on the Australian charts. A crackin’ little mod ditty. The 7inch vinyl of ‘Just Keep Walking’ came in a humble clear plastic sleeve with a square sheet of paper adorned with a black and white image of the guys doing their best Paul Weller impressions. That obviously blew the budget because by the time they got round to the video they had to make do with garbage bags and masking tape from their mothers’ kitchens. Younger clubbers may recognise the song from Part-T-One’s 2001 mash-up ‘I’m So Crazy’, later popularised further by DJ Eric Morillo.

Is this the sexiest song ever, or just the sleaziest? Both. Michael Hutchence at his most sensual and INXS seduce the world.

What are your top INXS songs? Leave your comments, below.

INXS: Never Tear Us Apart aired on Channel 7 in Australia in February 2014. Also see: Will the INXS mini-series air in the UK?