The Axis of (all things) Awesome

They’re one of the biggest musical comedy acts to come out of Australia. Meet the Axis of Awesome! TIM MARTIN chatted to the boys backstage just before their London gig last week. 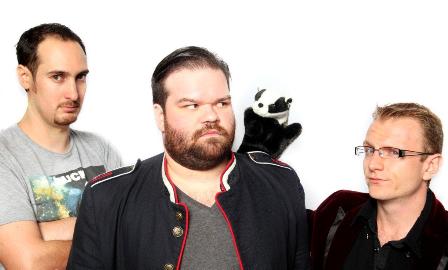 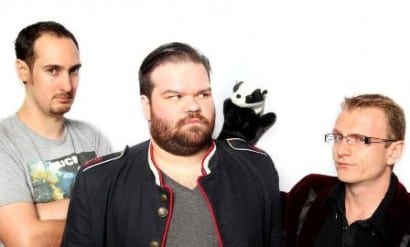 THEY’RE one of the biggest musical comedy acts to come out of Australia. They have almost 50 million YouTube hits on some of the most popular songs ever to go viral. They’ve got legions of fans all over the world and yet they’re still just a down-to-earth trio of Aussie blokes who love a laugh, love to perform and love to travel. Meet the Axis of Awesome! TIM MARTIN chatted to the boys backstage just before their London gig last week and found out from Lee, Benny and Jordan, that for these boys, it’s all about the banter (and interrupting each other, making fun of each other, bagging each other…basically what seriously funny best mates do)!

How was it to go from playing uni gigs in Sydney to sell out shows and festivals around the world?
Benny Davis: It happened slowly enough to not be like — ‘oh my god, how did I get here?’. It’s been four years of us doing these shows…
Lee Naimo: (interjects) But there’s no way we would be where we are without YouTube. It’s amazing to think of the measures we would have had to do for the same results before YouTube.

Tell us about your YouTube success. Did it all just start with your famous ‘Four Chords’ song?
Lee: Basically, we played it [‘Four Chords’] at the Edinburgh Fringe Festival several years ago and there was a BBC Radio guy there watching the gig. He bought our CD at the end and then played it on the radio in the UK several months later. We had no idea about it but it was huge and suddenly we had all these new MySpace friend requests (yep, back in the days of MySpace – Benny adds). We were like ‘cool’, put a video of the song up on YouTube and boom, it went viral. The song has now gone viral several times and we have something like 35 million hits across various different versions of the song!
Benny: (chimes in)We’re internet famous pretty much everywhere in the world — it’s the beauty of YouTube!

While the other two might claim they started the legendary ‘Four Chords’ song, Benny was it in fact you who came up with this web sensation?
Lee: Well, no…
Benny: Yep, it was me. I came up with it just from listening to music. People say ‘how long did it take?’, well as long as for all those songs to come out. And once I heard them all, I was like, that’s the same as that and as that and as that. Then when I was playing these covers at gigs, everyone was like ‘play those songs’ and I said, ‘no I don’t really want to because they’re all the same’, and they were like, ‘no they’re not’ and I was like, ‘yeah they are!’ and so it didn’t take me long after that to say, ‘well, I’ll prove it’. I did it the first time at university and it went well…and is still going ‘well’!

Would you ever do a show without the ‘Four Chords’ song?
Benny: We have once or twice, and it’s nice to be able to not to, but now it’s good to be at the stage where you do it as your encore and people demand it. We even tried it as a joke this year saying, ‘here’s the song you’ve all been waiting for’ then we did the ‘KFC song’, and then said, ‘thank you very much, good night’. And instead of the whole, ‘that’s so cheeky of them’, the crowd went, ‘are they not gunna f**ken play it’. They didn’t realise we were and got a bit angry.
Lee: The thing is, we change the song enough and people are keen enough to keep hearing it. If it wasn’t getting any response we would have stopped a long time ago but it’s still getting lots of response and for some people, that’s the only song they’ve heard of ours and so we don’t want to rip people off from seeing it live the first time. I’d like to think, as good as ‘Four Chords’ is, it’s not our funniest song. I don’t like this term but I can’t think of a better one, it’s like our ‘party trick’. It’s more impressive but less funny whereas our other stuff is funny!

Who are the best crowds in the world to perform to?
Benny: The most appreciative audiences are Americans because they’re just loud. They’re bred to hoop and holler — it’s like on tv shows where you have the sign that says ‘clap’ — they don’t need that! There will be times on stage when people are shouting and clapping and you’ve got to stay in character. What’s hard for me is to keep a straight face cos I’m not an actor. But that’s when you get some of the funnest shows, when one of us just loses it and then the rest of us lose it. It’s lucky the audience are laughing too.

Where’s your favourite place to tour?
Lee: I like to tour around home when we have been away for a while. We hadn’t done a show in Sydney for a while and then headed back there in February this year and sold out the Opera House. It was an amazing experience.
Benny: Sweden’s been good, but it’s hard to say. People always ask ‘what’s your favourite city to play in the US’ but it’s jaded by your experience. New York is easily my favourite city in the States but I probably had my favourite time in Lexicon, Kentucky! And then there was…
Lee: (interrupts) No, Benny…
Benny: (laughs cheekily) We played one place in America where they made, and I mean made the girls wear corsets that were one-size fits all. There were some busty ladies there, just falling out of the corsets and every time they walked up and said ‘can I get you a drink’, I’d be like, ‘yeah I’d like a glass of boob — I mean milk — I mean …’ (bursts out laughing).

What about in the UK? How did you guys get big over here?
Lee: Doing Comic Relief [this year]is what really broke us into the UK. You know, we had done Edinburgh and stuff but there were millions of people watching us do ‘Four Chords’ for Comic Relief and we weren’t even on until like one in the morning and we still had millions of viewers. After that — the YouTube video went viral again!

Is it tough to get into character for a live show?
Lee: Mine is! Benny’s kind of the straight man, the musical talent/nerd of the band…
Benny: (quickly cuts Lee off) Yep, you’re right, Lee is the ‘Karl Pilkington’ of the band. Although you have to split Karl in half and the half that gets picked on is me, and the dumb half is Lee.

You’d have to be best mates with all the travelling and touring, but have there been some good blues?
Benny: Yeah there have, and over some of the pettiest shit. The thing is, if anything, we’ve become friends through the band. But it is great to meet other acts and they say they butt heads just as much!

What comedians do you guys like to watch?
Lee: Tim Minchin.
Benny: I think the funniest show I have seen in the past view years is a guy called Doctor Brown. He’s a modern day clown, a guy from LA, who is based here [UK] now. It’s just something so ridiculous and so removed from ‘hey look at this clever joke’ to ‘look hey brave I am to be an idiot!’ As far as live shows go, he’s the funniest.

There’s quite a few Aussie musical comedy acts. Any competition between you all?
Benny: No not really, if anything, it’s only in the press – with reviewers who compare us all the time — wanting us to do a battle of wits. We’re different — different characters, very different style of music to the others because we use a lot of backing tracks and drums.
Lee: (cuts in) It’s kinda like going, would you compare Dane Cook and Chris Rock…they’re both stand-up comedians but they’re so different…
Benny: (doesn’t miss a trick) As different as night and day you might say…!!

Any plans for television?
Lee: Yeah, I just bought a new one, LED…
Benny: (chimes in) No, L-E-E …  (they both laugh hysterically).
Lee: Yeah, we’ve pitched some stuff in the states and we’ve got some ideas but we’re not doing it until we do it right. I’d hate to get on tv just because that is the thing to boost the profile and then have people go, ‘oh yeah, those guys, they’re shit…’  We’ve worked well as a live act for the past five years and to go to a tv show…I know the Conchords [Flight of the Conchords] did it well but I know for a fact that it wasn’t an easy process for them, so yeah, I don’t want to rush into it. If the offers are there then we certainly want to take advantage of it but we’re happy for now.

You’ve got a fantastic new song — the ‘KFC song’. Are you now getting lots of free fried chicken thanks to it?
Jordan Raskopoulos: (bursting into the interview) No, in fact we got kicked out of one last week for filming there!

Check out the hilarious new Axis of Awesome song below (warning – explicit and drug references):