The amazing Xavier Rudd does it again in London

Review by Lee Crossley
It’s 9.10pm on a Wednesday evening at  in Camden.

The crowd is stirring with anticipation. The Olympics are reaching a climax and London is simply buzzing. There is electricity in the air.

Josh Kumis, a singer-songwriter from Swindon, has the capacity crowd well oiled.

Barely 21, Kumis is a star rising fast, with his hit ‘Don’t Go’, which he finishes with, already reaching No.1 in the UK.

Rudd waltzes on stage 10 minutes after he’s due but that seems to be part of the act.

He could not be more relaxed. His two week growth fails to mask an ear-to-ear grin, cloth headband, flannel shirt, loose-fitting cotton trousers and shoes probably somewhere in the tour bus.

He waves, bows and takes his place behind his instruments, featuring several didgeridoos, lap guitar, drums, bar chimes, stomp box among others.

Behind him are two flags: the black and white Sea Shepherd’s flag, of which Rudd is a strong supporter, and the Aboriginal flag.

A boomerang and an indigenous wooden carving also feature behind him — visual clues of the culture that has become synonymous with his music, lyrics and message.

He greets the mass warmly: “Hello Koko, hello Australia.” His accent is a touch nasally, a touch bogan even, dare I say. But the Ruddman, part hippy, can get away with it. He can do no wrong.

He kicks things off with ‘Lioness Eye’, the opening track of Spirit Bird, a six-minute instrumental that, like many of his songs, pays homage to the Australian landscape and all the life — particularly birdlife on this album — it supports.

The didgeridoo features heavily and whips the crowd into a frenzy. Drums and computer-generated elements are infused and before long the mass is delirious with joy. To the untrained ear, there is a whole ensemble supporting Rudd but everyone knows it’s a one-man band. Incredible.

He plays ‘Fortune Teller’ and ‘Full Circle’ before taking a breather and conversing with his audience. His set is interspersed with light-hearted story-telling and Aussie banter. He relays a story about how he was offered ‘fine Australian wine’ after many of his European gigs.

“They’d offer me the wine and I’d look down at the label. Ah, another Jacob’s Creek. Beauty!”

The crowd laps it up. The thing about Rudd is he stands for plenty but never preaches, which is so much more persuasive than telling people what to think.

His 12-song set, before the encore, lasts over an hour. He’s so good a varying his pace. There are times when he will slow to a stroll before kicking into a sprint. He does as he pleases, at times seemingly oblivious to the hundreds assembled, at others chatting with them freely like they’re guests at a backyard barbecue.

But what strikes me is how he delights in making others happy. Nothing epitomises this more than his act of kindness during ‘Let Me Be’, perhaps his best known song.

Halfway through he motions for a fan to come on stage. She is ecstatic. Nothing can erase her huge smile. He hands her two drumsticks and allows her to play alongside him. She eagerly obeys. Her lack of talent is inconsequential. Everyone knows this is a lifelong highlight just by her radiating glow. Rudd laughs a friendly laugh at her efforts to keep beat. The crowd laughs, too, with them.

I track the mystery fan down outside the venue later to discover her name is Alex Goltz, a German living in Ireland who first discovered Xavier while travelling through Australia a decade ago. She’s seen him a dozen times now. Xavier has chosen well. She still grinning that same grin as she poses for photos with strangers, drumsticks in hand.

Xavier leaves for his obligatory encore. The crowd begs him back. He obliges, playing two more: ‘Bow Down’ and ‘Spirit Bird’.

He calms the crowd before ‘Spirit Bird’ to share a story of the song’s origin. Storytelling — the essence of the people who influence Rudd most, the Aboriginals. His story reveals a trip to the Kimberley where he had an encounter with a red-tailed black cockatoo. It’s not a story charismatically told but it’s engaging nonetheless. It’s honest, soulful and above all, it’s personal. It’s his but he wants it to be ours.

What a good bloke! And a masterful musician. Thanks Ruddman, for the memories. 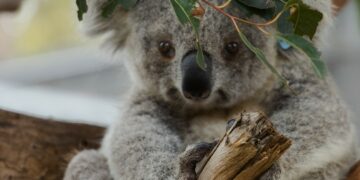 Figures released this week suggest Australia’s koala populations have plummeted by 30% in three years, and fewer than 58,000 now...