The Sydney Male Choir is embarking on a European tour which will include a performance at the Anzac Day service at Villers-Bretonneux in France and a joint performance with the Croydon Choir in London. 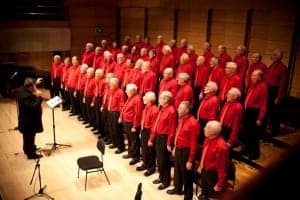 CELEBRATING its hundredth anniversary this year, the Sydney Male Choir is a not-for-profit organization whose objective is “bringing joy through song”. Since 1930 the Choir has performed yearly in Sydney’s Martin Place for the Anzac Day dawn service.

This year the 60-strong choir will sing at the Anzac Day service at Villers-Bretonneux in the Somme region of France, site of the Australian National War Memorial honouring the Australian soldiers, airmen and nurses who served on the Western Front.

It is part of a European tour which will see the Choir visiting and performing in Paris and Versailles, as well as holding a number of UK concerts.

In London the Choir is set to perform with Croydon Choir at Croydon’s Fairfield Halls on Saturday April 27 at 7.30pm. The two choirs will sing individual sets, before coming together in a shared finale.

The Musical Director of the Croydon Choir, Richard Hoyle, told Australian Times he is very excited about the upcoming joint performance.

“We are looking forward to a very special evening at such an auspicious time for all Australians. The programme for the evening is broad and varied, featuring traditional male choir repertoire alongside several new pieces, including a new take on Waltzing Matilda written especially for the event,” said Mr Hoyle.

“The evening ends with two Welsh hymns to be sung by the two choirs combined. We can promise all visitors a very warm welcome.”

The Sydney Male Choir will also be competing in the Cornwall International Male Voice Choral Festival before travelling to Plymouth and Bristol for further performances.

Tickets to the joint performance of Sydney Male Choir and Croydon Choir on Saturday April 27 are £10 and available at the door, or from the CMVC ticket office on 07546 445 506.

The Sydney Male Choir in action: