INTERVIEW | Ever dreamt of running away with the circus? Australian circus artist Emelia Holdaway has made this dream a reality for the stars of circus art group Airealism in their latest show, The Bleeding Hearts Circus, showing at Hoxton Hall. 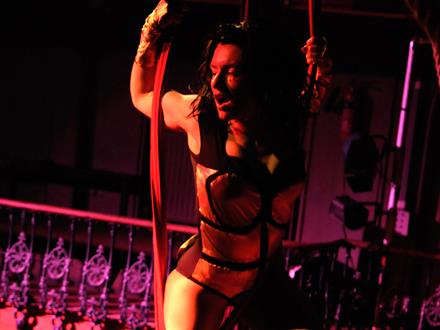 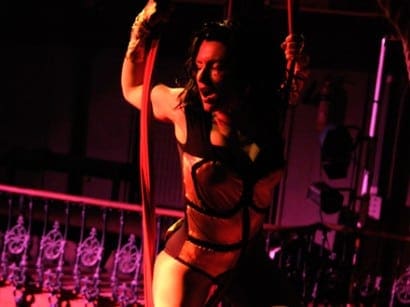 She is also the new company director for The Bleeding Hearts Circus –  the latest show by circus art group Airealism which she describes as “high energy, passionate and at times risque.”

Holdaway says she hopes to explore and portray the many facets of love, performed five meters above the audience, complete with aerial tricks, acting and music within London’s Hoxton Hall.

“Circus performance is an ideal medium because there is so much expression using the body,” says Holdaway.

“It’s always awe-inspiring to watch bodies in action, and be inspired by the strength, flexibility and creativity circus performers bring to their art – there are so many things that can be done with a simple piece of rope.”

Just as challenging as aerial performance is directing it. In addition to the difficulties of finding suitable venues with the necessary space and equipment, is the challenge of sending the right message – though Holdaway says her style remains upbeat and fun.

“I seek to facilitate processes and a space that encourages and supports other people’s creativity,” she says.

“I hope that people will come away wowed by the visual circus spectacle, but also inspired and with a wry smile of recognition – the quandaries and passions of love are universal.”

Holdaway first became a UK citizen for her day job as an environmental engineer, with Europe being at the forefront of climate change policy-making and activity. This year will be her ninth working in London, however she claims she’ll be watching the Australian election very closely this year to see if the home country has sufficiently caught up.

Before moving to the UK, Holdaway was encouraged to perform, making her stage debut at a friend’s cabaret club with a 12-minute solo as Wonder Woman on rollerskates. A producer saw her act and booked her in for a show two weeks later doing a feline-inspired contortion fire show.

“I haven’t looked back since,” says Holdaway.

“Producing and directing isn’t something I’d necessarily planned to do – but I’ve been involved in the community sector now for nearly two decades, and was inspired by the creativity and talent within Airealism.”

Perhaps most notable for the Airealism group is how, like Holdaway, they encapsulate the age old dream of running away to join to the circus, with each performer also having a full time day job, working as teachers, personal assistants, lawyers, and actuaries by day, and as circus performers by night.

The group have been met with much acclaim for past set pieces at Shunt, Jackson’s Lane, the Edinburgh Fringe Festival and the Glastonbury Festival, as well as sell-out shows at the Albany Theatre.

The fun doesn’t stop there, as Holdaway assures us there are already ideas for the next show, even if it does take up a lot of her free time.

“Life is short and there’s huge satisfaction in creating. I won’t lie, it can be a challenge at times, especially as there will be months at a stretch with nearly no downtime,” she says.

“But I wouldn’t want it any other way.”

Airealism’s The Bleeding Hearts Circus will run for four performances at London’s Hoxton Hall on May 30, 31, and June 1. Tickets are £12. For more information and to purchase tickets visit www.hoxtonhall.co.uk or www.airealism.com

Watch Airealism at work with their trailer for ‘Noir’: