Rock on with Rock of Ages at Garrick Theatre

REVIEW | The formula to a great musical is easy — catchy lyrics, energetic cast, punchy dialogue and a show-stopping finale. Luckily, Rock of Ages, has it all, offering a rollicking 80s romp through the rock annuals and a guaranteed great night out. 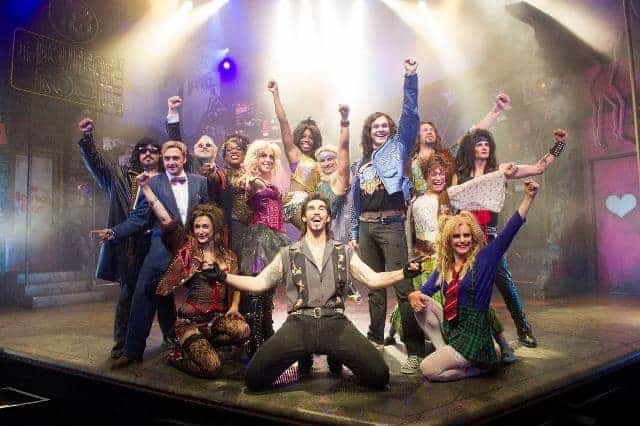 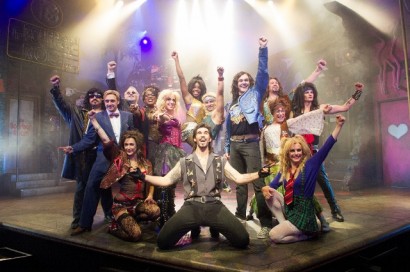 WITH SO many musicals and plays flooding the West End, it’s very easy to be picky, nay snobby, about what one enjoys. From the quiet and thoughtful Curious Incident of the Incident of the Dog At Night-time to the over-the-top offensive hilarity of Book of Mormon, there’s something for everyone.

However every week it seems a new show appears, shiny billboards being rolled up atop decorated theatres and the requisite papering of the city’s media and theatre forums with hyped exclamations of the next ‘big thing’. It’s the ones with the ex-Harry Potter’s that go first — sold-out before you can put down your TimeOut and logon. Then go the ones with the shiny new stage props and a flurry of Twitter hype, and you’re wondering what else you can see without booking 15 months in advance?

Amongst this melee of musical madness and play pandemonium, we have the answer the last-minute conundrum. The solution to the date planned a few nights in advance, the parents stopping though town wanting to ‘see a show’, or the impromptu night out — the good old-fashioned, long-running, stage spectacular.

Like a bawdy old friend, a long-running musical can offer just the right level of practised familiarity and high-energy fun. Mix together lyrics you sing along to, an energetic cast who can belt out a tune and a show stopping finale, and you’ve got yourself a crowd-pleasing hit.

Enter Rock of Ages, masters of turning this tried and tested formula into a rowdy night out with its own unique touch. What it lacks in original storyline it more than makes up for with a kick-ass 80s soundtrack, plenty of strong notes and off-beat characters.

Clichés abound as the scene is set by an effervescent Simon Lipkin as narrator Lonny. Evil corporate type determined to take over much-loved establishment and replace it with commercial enterprise, check. Guy falls for girl but too scared to tell her how he feels, check. Girl makes mistake of falling for bad boy instead, check. Everything turns out ok in the end – well, we wouldn’t want to ruin it for you.

The cast are superb, each playing up to their characters quirks and curiosities with hilarious effect  and belting out the tunes with such energy you’d think it was the first, or last, night of the production. Audience interaction is a key feature, with the 4th wall broken on no less than three occasions. At one point Lonny even brings out the show’s program to embarrass the main lead Drew (expertly played by Ross Hunter) by referring to Drew/Ross’s musical CV. The genuine giggle they have together makes it hard to know whether it’s an everyday part of the show or an impromptu addition.

The success of a long-running show like this often depends entirely on the musical numbers and thankfully Rock of Ages nails it. They belt out an endless string of 80s rock classics like ‘Don’t Stop Believin’, ‘Here I Go Again’, and ‘I Want to Know What Love Is’ that’ll have you humming tracks you’d long since forgotten all the way home.

It’s a rollicking all-singing, all-dancing romp through the rock annuals, and a guaranteed great night out. Best enjoyed a la the man in the front row — with shades, a fading rock t-shirt, not giving a damn while you sing and clap along to the tunes.

Rock of Ages is on at the Garrick Theatre until November. Tickets available £25-£65. See Nimaxtheatres.com for more information.