REVIEW | The life of Albert Namatjira, Australia's most celebrated indigenous artist is presented in an entertaining and moving performance starring Trevor Jamieson and Derik Lynch. 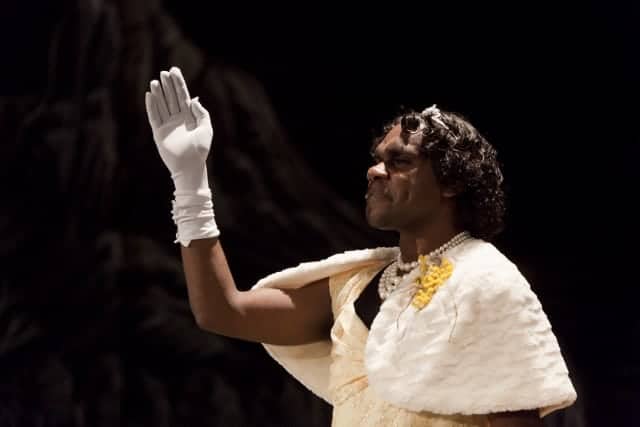 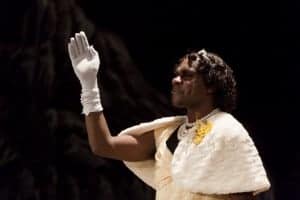 THE doors of the Purcell Room at the Southbank Centre opened half-an-hour before the performance. The company were already on stage. Like a statue, Aboriginal actor Trevor Jamieson sat, having his portrait painted by Robert Hannaford. Artists Lenie and Kevin Namatjira, direct descendants of Albert Namatjira used white chalk to sketch a landscape mural on the large black panels; the play’s backdrop. Actor Derik Lynch, also worked on the canvas, and violinist Nicole Forsyth, joined them.

When we spoke to Jamieson during rehearsals he described the overwhelming “feeling of Zen” he experienced when he first sat down with the Namatjira family members as they painted. Director Scott Rankin successfully recreated this sense for the audience, as they entered the space. Sitting and observing art being made is this way is calming. It’s a slow process, and I could have sat there patiently for the entire show watching this portrait, and this landscape evolve slowly, gently.

I was so absorbed in this display I was startled when it came to life. Jamison broke from his frozen pose and addressed the audience directly, introducing each member of the company. Unscripted, he explained what the show was about, and gave a bit of background on Albert Namatjira.

“I’ll let you in on a little secret…’Albert’ is not a traditional Aboriginal name,” he said.

Jamieson’s role was more of a storyteller, rather than playing one particular character. He shared Namatjira’s story, starting from his birth to traditional Aranda parents in the Australian desert. Like a parent reading a storybook to a child Jamieson would put on voices, and perform the different characters as a means of telling the story in the most entertaining and clear way.

The advantage of this type of script is the audience is always aware of what is going on. Jamieson is holding your hand the whole time, so there is no way of getting lost. And furthermore Jamieson is a delight to watch. His characterisations are spoofs at the right times, and more real at others. The disadvantage is Jamieson never becomes Namatjira to the point where you believe you are seeing the man himself. Because Jamieson performs multiple roles, and often breaks from character to narrate the story, the opportunity for the audience to invest emotionally with the character of Namatjira is lessened.

This is not such a problem for three quarters of the show where Namatjira’s life is celebrated. We see him as a typical teenager, falling in love, working as a stockman, meeting Rex Battarbee who teaches him to paint, becoming famous, making money and meeting the Queen. However, during the darker times — two of his children die, he loses his money, he is refused to own land, and is arrested and imprisoned — there is a disconnect, and the impact of these tragic circumstances is lost slightly, because Jamieson is still the storyteller performing as Namatjira, not just Namatjira.

Derik Lynch who plays a range of supporting characters, mostly women, steals the show. An incredibly talented and versatile performer, his presence fills the stage. With Jamieson they perform a number of fun musical items throughout the show, but it’s the harmonies they create using Aranda words against Lutheran melodies, which are beautiful, and touching. The on stage chemistry between the two is very strong, and together the create a polished and entertaining piece of theatre.

Having Namatjira’s descendants on stage is profound, and it’s hard to comprehend. A real piece of Namatjira is there as you watch his story brought to life. They don’t speak, but their presence is very strong. And their artwork, incredible.