Postcard from Jimeoin: On tour in the UK

POSTCARDS FROM JIMEOIN | Jimeoin is having so much fun on his UK tour he's added another date at Hammersmith Apollo on 23 November. He writes us a postcard from the road, somewhere inbetween Leamington Spa and Newcastle. 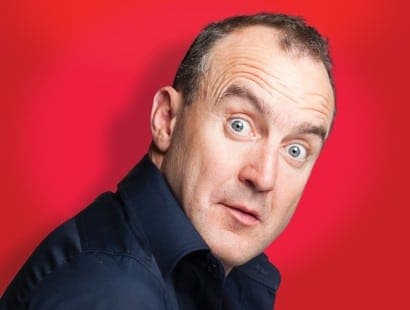 Been on the road in the UK for a week now. Bit of snow which is a big difference from Noosa. Had a weekend in London doing shows and then did Soccer Am at Sky. I met Paul Dickov and Greg Rusedski on the show. I told them I watched soccer with the sound down and music on. They thought I was mad and then when I watched their highlight packages they had it all done to music. Oh yeah!

Had to kick a football at the end of the show and I went on my ass. Very funny but for all the wrong reasons. Always the way.

Went and saw Django Unchained, Quentin Tarantino’s new film. They’re always great.  His films that is. Not always but most of the time.

I’m in Leamington spa. Home of real tennis, which is more like surreal tennis. I’m having a game today. I love it. It’s the maddest thing.

Off to Liverpool then onto Newcastle. Then Leeds and Preston. There are a few other places but I’ll have them done before I get around to finishing this article.

I’m back later in the year and have just added Hammersmith Apollo on 23rd of November which will be a big night. Not to mention The Odyssey in Belfast on 26th October… Oh I just did. Well what is the point of these articles if you can’t get a plug in? And can I just add that the tour is going really well. This leg is pretty much all sold out. If you want tickets go to the Live Nation website.

Almost forgot to mention that I went to Ireland on Monday on my day off to see my folks. That was great. But that was family stuff and not really part of this. Just trying to let you know I have a heart. And a home. I’m from Northern Ireland. West side. It’s theNorth West coast in a little town call Portstewart. East side. Right at the very top of Northern Ireland. In fact we couldn’t be any further north. The only thing further north that us is Donegal. But that is in the south.

I had some Northern Irish money to get ride of and it’s hard to off load in the UK. Even if it is legal tender. I bought a pint in London and gave a Northern Irish tenner to the bar man. He said what is this. I took a drink of the pint and said “that’s your problem”.

Jimeoin is playing at venues from London to Glasgow in February and April, before heading to Edinburgh Fringe in August. To win tickets to his 25 April show at London’s Bloomsbury Theatre see Win two tickets to Jimeoin, or for more information see www.jimeoin.com.