Pick of the flicks at London’s FilmFest Australia

We give you a rundown of some of the best films to go and see at FilmFest Australia. 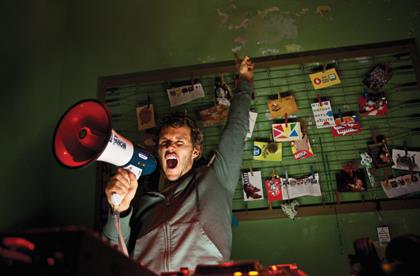 Not Suitable For Children
Sex, drugs and testicular cancer are the starting points for this massively enjoyable hit which opened the Sydney Film Festival earlier this year and will open London’s FilmFest Australia on Friday. Ryan Kwanten (True Blood) stars as the irresponsible but lovable party boy whose rock ‘n’ roll lifestyle is drastically altered when he discovers he’s about to be rendered infertile, and is seized by the need to become a father before it’s too late. Trouble is, he’s just not suitable for children… Director Peter Templeman ably handles the delicate subject matter to create a hugely charming first feature, set in a young, celebratory Sydney he clearly knows and loves.The soundtrack is inspired and also gives rising Aussie star Sarah Snook plenty to dance about!

The Eye Of The Storm
Fred Schepisi’s stormy portrait of a gloriously dysfunctional family is based on the novel by Nobel prize winner Patrick White. Promises of a lavish inheritance and unresolved familial grievances reluctantly draw estranged children Basil (Geoffrey Rush) and Dorothy (Judy Davis) to the bedside of their dying mother Elizabeth, played by the magnificent Charlotte Rampling. Determined to dominate and manipulate until the very end, Basil and Dorothy’s increasingly desperate attempts to mollify their mother spin them in ever more tragically comic circles. With such a celebrated cast on board as well as a standout performance from Schepisi’s daughter Alexandra, The Eye of the Storm positively dazzles.

Toomelah
In a remote Aboriginal community 10 year old Daniel aspires to be a gangster just like the male role models in his life. Director Ivan Sen (Beneath Clouds) set out with a handheld camera to create an authentic fly—on—the—wall  tour of life in his mother’s hometown, the remote Indigenous community of Toomelah on the borders of Queensland and New South Wales. The resulting film is a deeply personal account of contemporary mission life in which a ten year old boy skips school to hang out with local gangsters. The cast of mainly local, non-professional actors is headed by the astonishing first-timer Daniel Connor who plays the mesmerising young lead and Dean Daley Jones (Mad Bastards). A gripping, intensely naturalistic exploration of a community battling addiction, unemployment and Stolen Generation grief, perfectly balanced with moments of tenderness and humour, Toomelah received a standing ovation when screened at Cannes last year.

Any Questions For Ben
Fancy a new urban comedy from the director of The Castle & The Dish? Yes please! Ben (Josh Lawson) lives the Melbourne highlife, flitting between exclusive parties, well paid jobs and expensive women, but when any kind of commitment appears on the horizon, he’s already running the other way. Then, a chance meeting with an old school friend causes him to re-evaluate his life, sending him into a much overdue existential crisis. Will Ben become a better man to get the girl of his dreams? Or is it all just too far out of his comfort zone? Melbourne is as hip and stunning as New York in Australian comedy legend Rob Sitch’s well-scripted rom-com, crowned by Ben’s mix of hilarious, concerned and totally vacant friends. With Rachael Taylor (Red Dog), Daniel Henshall (Snowtown) and comedienne Felicity Ward, you’re not going to know whether to laugh or cry throughout.

But wait, there’s more!
FilmFest Australia are excited about all their feature films showing at the festival, but they’re also very proud to have some top shelf shorts joining the screening list too!

“We’re stoked to report that our Bondi beach based partners Flickerfest are back with us once more with their expert selection of short films,” the peeps at FilmFest Australia told Australian Times.

“Presenting an array of stunning Aussie shorts before each film in the programme, Flickerfest showcases the best upcoming Aussie film talent, whom FilmFest Australia hopes to welcome back in the future.”

With the likes of Nullarbor, Matt Jenkin’s Cockatoo, Josh Lawson’s award winning comedy After the Credits, and the incredible Eli the Invisible, audiences are in for a treat before all their feature length movies at the Aussie event.