Networking, with a side of entertainment at Sunday in the Apartment

Business networking may sounds like a dry and serious business, but Australians never do things by the book. 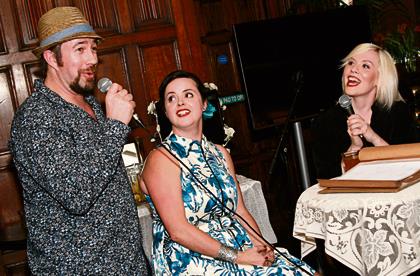 ON Sunday 12 May members and guests of Australian Business were treated to Sunday in the Apartment, a showcase of Australian talent, complete with Aussie artists, comedians and musical theatre pros.

Held at Kettner’s in Soho and presented by the Australia Day Foundation, business folk were able to mingle over drinks and cupcakes. Both corporate members and performing artists seemed happy to network in a casual space, taking full advantage of an environment somewhat different to the boardroom.

Kicking off the afternoon were hosts Daniel Fletcher and Amelia Cormack singing ‘Mama Told Me Not To Come’, before introducing the first artist, singer/songwriter Emi Green. Discovered by Fletcher in a bar, Green serenaded the audience with some gorgeous original pieces from her upcoming album entitled Letters.

Speaking to Australian Times, Green said: “This process is great, it’s wicked, I’m really glad because there’s so many of us here and I think Australians do really great work. It’s great that we can all get together and encourage each other.”

Second was comedian Kent Valentine who shared a very amusing story from his adolescence, making napalm with a somewhat reckless friend named Pete. Valentine relayed the spoils including a scorched garage, an exploded driveway, a tile laying apprentice with no eyebrows and $4,500 in damages.

To wrap up Act One, we met singer Erin Cornell, who has starred in various shows around the globe including Wicked and A Class Act. Cornell performed a song from her one woman show An Evening with Erin Cornell.

“The comedian too, just excellent, I think we were all laughing and relating to his stories.”

Also present was the Australian High Commissioner to the UK Mike Rann, and Australian Woman of the Year in the UK, Siobhan Reddy. Past shows boast performers such as Tim Minchin, Ray Meagher and Casey Donovan.

Keith Gunaratne, CEO of EP&T Global said: “It’s great to have events like this, it’s a great venue, and everyone has been wonderful.”

Act Two saw some more great talent in Telen Rodwell who performed some pieces from his debut album Shadowman, followed by a few pieces sung by Cormack and Katie Alison but credited to the event accompanist, Peter Rutherford, who co-wrote the pieces for a new musical entitled Love Bites.

The final guest, and certainly not the least memorable, was the prodigious Trevor Ashley, a Liza Minnelli impersonator who belted out Sondheim’s ‘Losing My Mind’, as well as some well-known hits from Kander and Ebb. Ashley perfectly epitomised the big personality that is Minnelli and it’s no surprise he has established a successful career for himself as well as supposedly being named “Mardi Gras Royalty” back home.

With a concluding performance of ‘A Little Help From My Friends’ from all the performers, the venue was soon packed with audience members and performers exchanging compliments and forming soon to be strong connections with one another.

“We wanted to do a good job today, and the feedback that’s come back is that everyone was really pleased,” said Fletcher.

“I hope there will be opportunities for some unique relationships to be forged with the business community.”

“It’s such a fantastic opportunity for artists to showcase their wares to Australasian business people that they may never normally meet,” adds Cormack.

“I hope that people take away how much extraordinary talent we have in Australia. How hard working we are, how driven we are to pursue our dreams and to make those things happen.”

Follow @AustBusiness for the next date announcement or see www.australianbusiness.co.uk for more networking events.