Made In Adelaide at the Edinburgh Festival [REVIEW]

BLOG & REVIEW: Oz is well represented as usual at Edinburgh (or 'Embra', as we like to say), but there is a whole venue at Summerhall in the south of the city showcased as 'Made in Adelaide'. Our Aussie culture vulture paid a visit.

The 70th Edinburgh Festival is well under way with the International, Arts and Fringe festivals into their third week and the Book Festival in to its second.

The 3-day Edinburgh International Television Festival starts this Wednesday, though a ticket there would set you back £735!

Oz is well represented as usual at Edinburgh (or ‘Embra’, as we like to say), but there is a whole venue at Summerhall in the south of the city showcased as `Made in Adelaide`. This year’s MIA umbrella covers 70 artists, presenters and producers from Australia’s very own festival city – Adelaide, the `City of Churches` by the Torrens River.

The event is being compered by the redoubtable Amelia Ryan who much to my amazement came all the way from South Australia while a good 7 months pregnant. On Saturday 12th August, I went to see to a Made in Adelaide (MIA) event at the Cameo Cinema in the city’s Tollcross area. The (free) offering that day was the 1976 film `Storm Boy` starring Peter Cummins, Judy (billed as Judith) Dick and child star Greg Rowe, directed by Henri Safran, a French director who has worked extensively in Australia.  The series of five screenings included the successful 2014 Oz horror film `The Babadook` directed by Jennifer Kent. For those who attended on Thursday 10th there was a bit of a red-carpet treatment with a complimentary barbie. A very Australian night but without the sultry weather.

The town is heaving with folk from all across the globe and it’s expensive – a week at the 5-star Balmoral Hotel which sits on top of Edinburgh Waverley railway station would set you back £3,000 or AUD$4,850. Not many performers stay there except perhaps Sir Les Patterson or Dame Edna Everage. Most of the artistes are staying in shared flats or are couch surfing.

On looking in at the Summehall venue I noticed that while Judy Davis and Nicole Kidman were sadly absent the imposing figure of Alexander Downer was to be seen. He was the leader of the Liberal Party from 1994-1995, the longest-serving Foreign Minister in Australian history from 1996-2007 and he is currently the Australian High Commissioner to Britain.

Sunday 13th August saw Amelia, bump and all, compering the Made in Adelaide Cabaret Gala. She is really an inspiring young lady. In her condition, I’d have stayed at home and watched the event on the Internet!

Changing her outfit several times Amelia introduced the various Adelaide based performers. Firstly, there was dark-haired Carla Lippis (below right, with MIA Executive Director Peter Louca) who is described as `oozing an impressively brooding sensuality` and who goes `from sensual mumble to soaring magnificence`.  She sang the Jimi Hendrix classic `Can You See Me? `. Her interpretation was lively involving a trip down in to the audience. Carla will be at the Edinburgh Playhouse until Saturday 26th August. 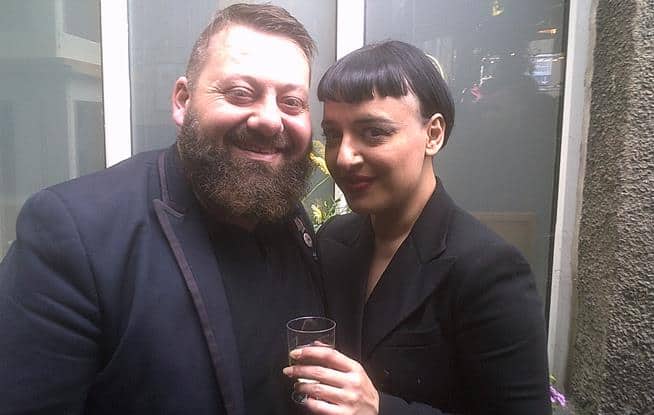 Then there was the `wickedly talented` Anya Anastasia in a green gown who performed `You’re my one true love… for now`. Her show `Rogue Romantic` will be on at the Assembly Checkpoint until Sunday August 27th.

There was an amusing interlude when two nude performers, one male one female, performed a `jelly street dance` on the stage covering their intimacy rather unsuccessfully with a slab of red jelly which got smaller and smaller until… it was raspberry flavoured by the way. I mean the jelly, don’t I?

Next was Hans who introduced his `Mein Camp` routine. Originally from Berlin but now settled in Adelaide Hans’ act is described by Vogue Australia as `Hilarious..Ridiculous..Brilliant!`

Hans was followed by Joanne Hartstone who is appearing at the Assemble Roxy until Monday August 28th as tragic film star Jean Harlow who died in 1937 at the age of just 26. Like Judy Garland and Marilyn Monroe who also feature in Joanne’s act Harlow suffered burn out and she died from uraemic poisoning after only 10 years of performing.

Amelia accompanied by musician and co-MC Michael Griffiths then did the Olivia Newton John classic (Let’s get) `Physical` which was number one in 1981. She jokingly brought a roll of kitchen towels on to the stage just in case she gave birth right there and then! Next came Lycra clad Peter and Bambi Heaven from Queensland (above). Their mixture of illusion and song was called `When Love Becomes Magic`. According to The List magazine `seeing this show is like accelerating at full speed with the roof down. `

Finally, Reuben Kaye whose flyer describes him as `Obscenely intelligent, beautifully filthy and rib-crackingly funny` did his cabaret act in huge false eyelashes.

After the Oz festival furies had all been introduced there was a three-hour long buffet with free food, plenty of vol-au-vents, sausage rolls, sandwiches, spicy chicken legs and various other goodies. It was pleasant to mingle with the Adelaide crowd and much Pikes Pilsner Lager and Cooper’s Original Pale Ale was consumed.

Amelia who is due to give birth on October 22nd said when I interviewed her: “I love Edinburgh, you really feel you’re part of the international landscape – it’s so international.” She disclosed that her new arrival will be a boy but declined to say which name she and her partner Zac Tyler have chosen.

Michael and Amelia flew back to Australia on Sunday 14th August but the rest of the crew will be here till the end of the month.

Elsewhere, local writer Irvine Welsh returned to Leith (port of Edinburgh) for a special charity event to celebrate the 21st anniversary of the release of Trainspotting, Danny Boyles’s film version of his 1993 novel about young Edinburgh drug addicts.  His new play `Performers` co-written with Dean Cavanagh is at the Assembly Rooms on George Street until the 27th August.

Veteran comedian Mark Thomas performs his one-man `A Show That Gambles on the Future` with audience participation at Summerhall until Sunday August 27th.

There are 3,398 different shows at this year’s various festivals so you would have quite a job to see them all.