Mammoth Mammoth, a heavy rock band from Melbourne are performing in London tonight at the Islington Academy. 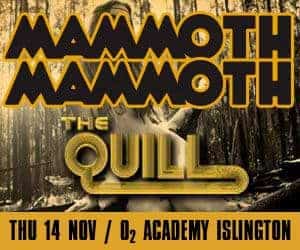 SO loud they named them twice, Mammoth Mammoth are a heavy rock band from Melbourne. A mash of glam, doom, punk and psychedelic rock influences, they tagged their sound as “Good-time-murder-fuzz.”

Their physical, no-holds-barred approach and front man, Mikey Tucker’s reckless performances gained them an immediate and dedicated following in Australia. Now it is your chance to experience hell on earth, as Mammoth Mammoth are performing with Swedish metal band The Quill  in London tonight at the Islington Academy.

In their own words the band says: “More than 200 years ago, four men were transported from Europe and sentenced to life imprisonment on the harsh penal colony of Australia – their only crime, killing unicorns to feed their families. On that day, each swore an oath of revenge upon the continent that had forsaken them and the creatures that had condemned them.

“Now, the seed of this foul prophecy has finally born its bloody fruit. The four sole descendants of these men – Mammoth Mammoth have finally escaped Australia and will be joining forces with Swedish metal barbarians, The Quill, to rain down thunderous riffs across Europe and unleash a crushing wave of brutal murder-fuzz aimed at decimating every last living unicorn.”


Click here to buy tickets to the gig tonight.

The problem of not enough jobs in Western Sydney has been in the public spotlight for half a century.

President controversially chose to spend Independence Day at Mount Rushmore, which is sited on land previously owned by Native Americans.

There's big money on the line with tonights draw, $4 million! Here are your Tattslotto results for Saturday, 4 July...