INTERVIEW | She crowd surfs, she smokes not one but two (fake) cigarettes at once and she can sing beautifully in three languages (English, French and German). She is postmodern cabaret sensation Meow Meow and she is ready to set the Southbank Centre stage on fire in her show Little Match Girl. Well, hopefully not actual fire. 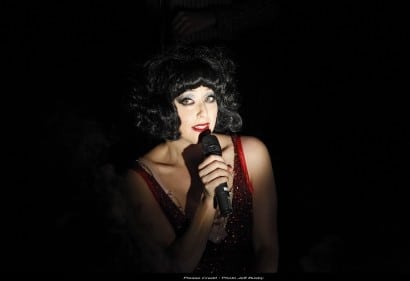 In this modernised fairy tale Meow Meow, who plays the despairing Match Girl, tries to stay warm in the cruel cold of winter with her dwindling supply of matches. Meow’s version perfectly combines Anderson’s tragic tale with her own distinctive comedy styling, signature physical theatre and a vast and eclectic musical pallet full of brand new tracks and some covers. It is a unique blend of humour and heartache.

She tells Australian Times: “I have loved the Little Match Girl story all my life and there is enough flexibility in the story to incorporate a contemporary twist full of comedy and tragedy.

“It is up to the audience as to which parts they take as humour and which ones as tragedy.”

The show reunites Meow with her regular accompanist, composer and best friend Iain Grandage whom she says “takes her lyrics and turns them into musical masterpieces”.

Joining Meow on stage on piano for the UK leg of her worldwide tour will be one of her great friends, the marvellous Lance Horne from New York whom Meow says is “a naughty, naughty influence on me”.

Also present is a band of sensational musicians from London. Meow says her “band must be fast, happy with improvisation and are willing to go with me wherever the journey takes me that night”.

In one of Meow Meow’s previous shows the band wore only their underwear, so who knows what she has in store for her London accompaniments in this UK premiere.

It is clear that Meow is not afraid to take risks, including in her creation of the promo shot for the UK show, in which she wears a headdress of flames.

Meow says: “The front of dress was made entirely of matches and paper while the back of the dress was, well, non-existent. There were several fire extinguishers standing by in case there was an emergency during match lighting but luckily they were not needed.”

When asked if there would be any fiery stunts in Little Match Girl Meow Meow hinted that vocal pyrotechnics might be on the cards, but the rest of the stunts are to remain a big, fabulous surprise.

As Christmas nears and Christmas carols are being blasted on the radio I had to know what is Meow Meow’s favourite Christmas Carol is to sing.

“My favourite Christmas song would have to be one of the songs written especially for me for Little Match Girl by fellow Australian artist, songwriter Megan Washington.

“She’s a sensational singer songwriter. We’ve become friends over the years and are both quite visceral performers too.”

Little Match Girl promises to be a cocktail of glamour, comedy, tragedy, fire and sequins served straight up in a martini glass with two olives. Just how Meow Meow likes it.

Tags: Australians in Londoncabaretliving in LondonLondonSouthbank CentreStage and screenthings to do at christmas in london