Jimeoin – What?! at the Apollo: Two for One reader offer

Don't miss out on hilarious stand-up genius Jimeoin when he presents his new show 'Jimeoin - What?!' to the Apollo on Saturday 23 November 2013 with our special TWO FOR ONE reader offer. 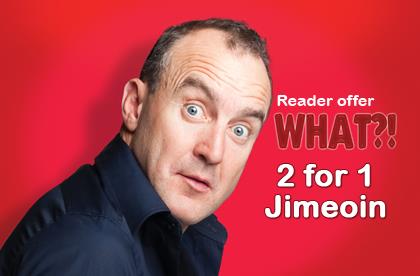 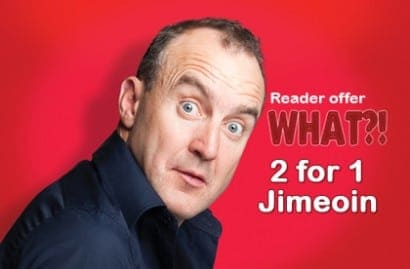 JIMEOIN may have grown up in Northern Ireland, but with his laid-back sense of humour and adopted larrikinism learnt from almost a lifetime spent in Australia, we can definitely claim him as our own!

From his early appearances on the classic sketch show Full Frontal, his observational stand-up and his excellent show Jimeoin which ran for three seasons on Aussie TV, Jimeoin’s is a face we’ve all come to know and love.

Now Jimeoin is back in the UK, with his brilliant observations on every-day life in his new show Jimeoin — What?! It is hilarious world-class stand-up from the internationally acclaimed star of ‘Live at the Apollo’, ‘The Royal Variety Performance’, ‘Channel 4’s Comedy Gala 2012’, ‘Best of Edinburgh Comedy Festival’, ‘Jason Manford’s Comedy Rocks’ and ‘Michael McIntyre’s Comedy Roadshow’.

For those Australians in the UK keen to catch the funnyman in action, we’ve got a special TWO FOR ONE reader offer to Jimeoin — What?! at the O2 Hammersmith Apollo, London on Saturday 23 November 2013.

Get your 2FOR 1 JIMEOIN TICKETS, here

Live Nation in association with MZA present Jimeoin — What?!

‘Jimeoin recalls the familiar at a fantastically silly level, boiling his audience down to a tear-filled, gibbering mess’  (Scotland on Sunday)

‘He’s clean, charming, witty and above all funny’ (Sunday Times)

‘Classic nonsense… stand-up comedy at its best’ (The Scotsman)

‘A series of hilarious, often surrealistic climaxes. This is the comedy of one who truly perceives human behaviour, breaks it up and puts it all together again in all its ridiculousness, to leave you with your eyes streaming… Comic genius’  (Edinburgh Evening News)