Jim Jefferies is pulling no punches

Punched on stage, banned by Christian groups and hated by ‘many’, Jim Jefferies is one Aussie comedian who is seriously turning heads. PAUL BLEAKLEY finds out how this ‘unknown bloke back home’ cracked America, how he keeps cracking up people around the world, and how he’s moved on from the Alcohocaust. 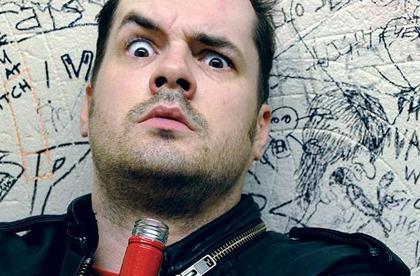 HE has been described as the most insulting stand-up comedian in the United Kingdom. His provocative style of observational humour is peppered with tales of deviancy that have been branded “offensively hilarious”. But it is this often cringe-worthy honesty that has propelled Australian comic Jim Jefferies to a place amongst the international comedy elite.

Jefferies, originally from Sydney, has firmly established his position as one of Australia’s most successful comedic exports over the past decade. Appearing at his ninth Edinburgh Fringe Festival in August, his show Fully Functional was met with almost universal praise for its wit and shameless portrayal of life.

Despite being renowned for the provocative nature of his routines, Jefferies claims that he does not actively set out to make his shows as offensive as possible.

Jefferies has courted controversy throughout his celebrated career as an international comedic icon. In 2005, right-wing political advocacy group Christian Voice attempted to have his show banned on the basis that his routine was both “sick and repellent”. The group’s attempt to ban Jefferies only served to increase his public profile and provide an additional element of notoriety to the rising comic talent.

Although Jefferies has lived outside Australia for over a decade, the comedian still considers himself to be an ‘Australian’ – despite what he perceives as a lack of support from the Aussie media.

Jefferies is the first Australian comedian to have secured his own television program in the USA, with his series Legit premiering on American network FX in early 2013. The show is scheduled to be broadcast in an astonishing slot, nestled in between programs headlined by two other icons of comedy: Charlie Sheen and Russell Brand.

“I wonder if I have pissed people off in Australia… I am the first Australian comedian to get my own TV show in the States and yet no one in Australia knows who I am,” Jefferies laments.

“People like Wil Anderson go to try and make it in the States and that is all the media want to talk about even though I’ve already done it.”

It is Jefferies’ commitment to his role as a storyteller that gives the anecdotes that make up his routine the power to simultaneously shock and provoke uncontrollable laughter. Jefferies admits that his chief talent lies in embellishing the everyday things that happen to him and recounting them in a way that highlights their inherent hilarity.

“The difference between a comedian and an ordinary person is that a comedian should never have to end a story by saying ‘you had to be there’… Everyone has stories where they go out, get drunk and things happen to them.”

Following his successful run in Edinburgh, Jefferies is embarking on a fourteen show whistle-stop tour of the United Kingdom before returning to work on his forthcoming television series. The Fully Functional tour will be Jefferies’ first nationwide circuit since his highly praised Alcohocaust tour in 2010.

“Because there was no tour last year, it means that I have two years’ worth of material in the new show… so everything will be fresh for people that have seen the last show.”

The Fully Functional tour has already sold out its London show at the Lyric Theatre, although dates still remain throughout the country to experience Jefferies’ masterful storytelling skills. It is highly likely that your moral sensibilities will be offended in some way. It is also highly likely that you will not be able to help laughing.