On the opening weekend of the brand new multi-million dollar Perth Arena, INXS drummer Jon Farriss announced to a 15,000+ crowd that INXS would no longer be touring live. 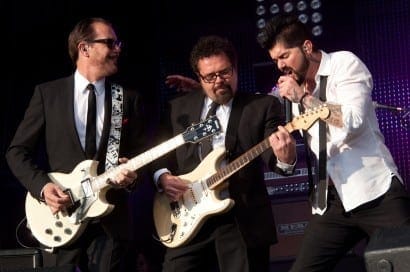 ON the opening weekend of the brand new multi-million dollar Perth Arena, INXS drummer Jon Farriss announced to a 15,000+ crowd that INXS would no longer be touring live.

35 years after INXS first formed, it seemed a fitting end to the historic band to declare this show their last ever. In homage to the band, Matchbox Twenty’s Rob Thomas joined the band (INXS) and vocalist Ciaran Gribbin on stage and performed INXS’s signature closer, “Don’t Change”, in the band’s encore.

“We understand that this must come as a blow to everybody, but all things must eventually come to an end. We have been performing as a band for 35 years, it’s time to step away from the touring arena”

“Our music will of course live on and we will always be a part of that.”

“We would like to express our heartfelt thanks to all the friends and family that have supported us throughout our extensive career. Our lives have been enriched by having you all as a part of the journey”

After a relentless career touring US, Europe, South America, and the Far East constantly throughout the 80’s and early 90’s, fuelled by the success of records such as Listen Like Thieves, Kick, X, and Welcome To Wherever You Are, INXS have well and truly cemented their reputation as one of the world’s greatest live bands.

The touring successes included memorable performances headlining iconic venues across the world — Wembley Stadium in the UK, Texas Stadium in the US and Rock in Rio in Rio De Janeiro attracting 120,000.

The band paid homage to their charismatic former front man Michael Hutchence, who they lost in November 1997.

“It’s been 35 years for INXS as a live touring band and unbelievably it’s been 15 years ago since we lost Michael” said Jon Farriss.

“We lived for each other in the trenches and we loved each other. It was the six of us against the world and then suddenly and inexplicably we were but five. We were lost right at the moment we were on top.”

Despite this significant loss, the band regrouped and carried on.

“We never took a soft option, it was the adversity, the challenge and the struggle that forged us into the live working band we became. And this was as big as it could possibly get when it came to a challenge” said Andrew Farriss, “and in the end we decided for a whole bunch of reasons to march forward. To us there was no other option, families always move forward.”

The last 3 years has seen a resurgence of INXS with their songs once again filling the radio airwaves, and a rise in audience numbers with the live show. The song “Original Sin”, with Rob Thomas on vocals, reached number 1 on the Billboard dance charts.

As Jon Farriss says, “INXS’ touring days could never last forever. We wanted it to end on a high. And it has.”