Homelanz not what I expected but pretty choice, hey bro

“With all the terrible stuff that’s been happening in London and around the world, isn’t it great we can get together and enjoy some good food, drink and music in this environment?” Can’t argue with that, Jayson. 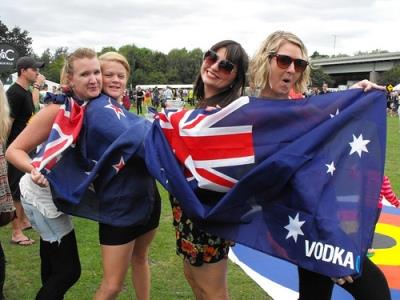 “What are you up to this weekend?” curious friend asks.

“Off to Homelanz,” the reply.

“Umm, there are some other bands but I don’t really know much about them.”

Retrospectively, it wouldn’t be overstating things to say Aussies were in the minority.

Not complaining. Love the neighbours from across the ditch. They are really ‘choice’.

It just came as a shock when the realisation dawned on me that for once, us Aussies were the ones under represented at an Australasian music, food and wine showcase.

My day, like many others I’m sure, started with a beer and a barbie at a friends’ place.

Then it was off to Boston Manor Station to hand out a few Australian Times to the Homelanz punters as they stepped off the Piccadilly tube.

Some took the paper happily and without fuss. Others, especially aforementioned neighbours from ATD, needed a little more persuading.

“Why would I want an Australian Times, bro?”

“Everything you need to know about Homelanz is in here.”

Then, I just dropped the “about Homelanz” bit because it seemed superfluous.

With our PR duties behind us, it was time for us to join the masses at Boston Manor Park.

The food tents were dotted around the perimeter, offering a selection of Australian and New Zealand food and wine.

While perusing the various options, I was set upon by an indigenous man with a great white beard who was offering what seemed to be like free hugs.

Why not? He looked a bit like the dude from the two dollar coin. Turns out he got a gig over here telling indigenous stories.

“Francis Firebrace is the name. I’m an artist, musician and storyteller,” he said while wrapping his bear-like arms around me.

Apparently Francis came to London for eight weeks on a bit of a cultural tour. That was 11 years ago. “They let me stay so why would I go home? The earth is my home.”

Curious character is Francis. Led me to want to find out more so I hit up Stalkbook when I got home. Turns out our man Francis has nearly 1700 friends on the book, attended ‘Life’s University’ and lists The Beatles, Beyonce and Bob Dylan as his favourite artists. Only one interest under the ‘interests’ section: life. That pretty much covers it!

I could have stayed and chatted all day. I’m sure he wouldn’t have run out of things to talk about. But this punter had drinks to drink, food to eat and music to consume.

Jayson Norris and his band came on around 5pm and put on a bloody good show.

It was a bit of guitar, some percussion and good vibes. Later, I would bump into Jayson in the crowd posing with a few punters for pics. He was really happy with how the day was going and spoke about his excitement about helping get it off the ground. “With all the terrible stuff that’s been happening in London and around the world, isn’t it great we can get together and enjoy some good food, drink and music in this environment?” Can’t argue with that, Jayson.

Lady6 was next … an original singer, rapper type with a decent voice and some good tunes.

Then it was Katchafire’s turn. Hadn’t heard of them before Homelanz but the brotherhood assured me they are big in NZ. I took their word for it. I think they were decent, too.

But the draw card was, without doubt, Sneaky Sound System. There is a reason they are in the business of entertaining. They do it very well. Connie, sporting blonde locks and a skin tight leopard print body suit, bounced up and down the stage with hundreds eyeballs following her every move, singing every word in unison. Meanwhile Black Angus, dressed in a black lounge suit and black bow tie, kept the beats pumping from the back. There were some familiar, some new but all infectious, addictive dance beats. Sadly, it had to end. But the set was very generous and left all present very satisfied, indeed.

Homelanz … not what I expected but not at all disappointing, either. Two thumbs up from this satisfied (but now weary) punter! I’d better go to bed.