Hey there, it’s The Seekers, AO

Together since the 1960s and currently touring the UK, Australian folk supergroup The Seekers have been appointed officers in the Order of Australia. 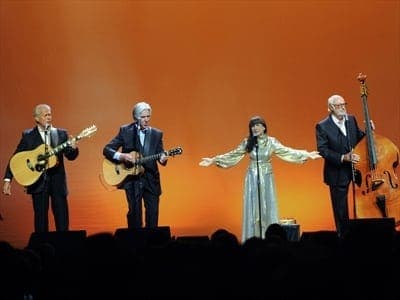 As one of the few bands from the 1960s still with their original line-up, The Seekers have proved their staying power. Now they’re being recognised in the Queen’s Birthday Honours.

Judith Durham, Athol Guy, Keith Potger and Bruce Woodley have been appointed officers in the Order Of Australia (AO) for their services to the performing arts.

Celebrating 50 years since they began their distinguished career, The Seekers have been on the road performing sold-out shows across Australia, the United Kingdom and Ireland.

Speaking from London after one of the supergroup’s shows at the Royal Albert Hall, double bass player Athol Guy said there was a nice “royal connection” about their award and tour location.

“It was a perfect bit of timing because we’ve just finished our 50th-anniversary tour over here in London with two sell-out shows at the Royal Albert Hall, so there’s a nice royal connection coming up to the Queen’s birthday,” he told AAP.

With each member being recognised for their career, whose hits have included Georgy Girl, I’ll Never Find Another You and A World of Our Own, Guy said the honour was particularly special.

“It’s a lovely moment for the four of us, to each individually be named in that way,” he said. “Collectively, we’ve had so many honours as a group, it’s hard to imagine that there’d be any more to come. And this one came right out of the blue for all of us.”

The group suffered a setback in 2013 when singer Judith Durham was admitted to hospital with a cerebral haemorrhage after the first Melbourne show of their 50th-anniversary concert.

However, after three months of rehabilitation, doctors gave Durham the OK to perform.

“It’s a very nasty thing to happen to anyone, but the lovely thing about it is I think it was her belief that she could always get back with us and finish that Australian tour,” Guy said.

“It really kept her moving along in positive mode.”

Durham said she hoped the award would encourage others.

“We were just four unknown, aspiring Australian musicians singing happy, uplifting, melodic and inspiring songs, and being true to ourselves,” she said.

“We hope that this award might serve as encouragement to other Aussies to do the same.

“We are thrilled and delighted to accept such an honour.” – AAP