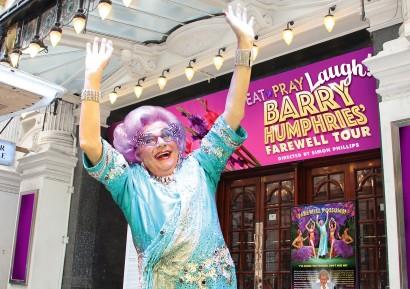 AUSTRALIA’S favourite entertainment export, Barry Humphries, is set to bid farewell to a lifetime in comedy with a final UK tour.

The Eat, Pray, Laugh! Barry Humphries Farewell Tour, directed by Simon Phillips, will start its West End run on 13 November before heading on venues in a number of UK cities, including Leeds, Norwich, Glasgow and Manchester. The epic string of shows will also take in Milton Keynes and Edinburgh before landing at the Palladium.

The two-act special will feature grandfatherly advice from Sandy Stone, and the outrageous Patterson, before the real star of the show — the purple-rinsed housewife from Moonee Ponds — makes her “orgasmic appearance in Act Two”.

“I’ve been away from home too long possums, and my true home is the London Palladium,” said Dame Edna.

“Book now for the housewarming party of the century!”

Surrounded by spectacular sets and dancers, Dame Edna promises to “empower” audiences as she meditates on the big issues of loss, gender, climate change, gay marriage and ethnicity.

The West End run will cap off a spectacular career for Dame Edna’s creator. The Royal Tour, Dame Edna’s Broadway show, won a Tony Award and the “housewife superstar” has performed to packed theatres, including Royal Albert Hall at the “Last Night of the Poms”, and the Theatre Royal, Drury Lane.

A legendary UK special “A Night on Mt. Edna” as well as her own innovative chat show “The Dame Edna Experience” has made her a beloved UK creation and this show is guaranteed to appeal to UK audiences and Australians alike.

For information on the UK tour see Dameednafarewell.com or for tickets to the London Palladium go to Seetickets.com or call 0844 811 0058.