Fred Schepisi and his eye for a storm

One of Australia’s most decorated directors — Fred Schepisi — will be celebrated at London’s FilmFest Australia this week. GUY LOGAN talks with the film doyen about his new film The Eye of the Storm, Aboriginal abuse, and his favourite London food haunts. 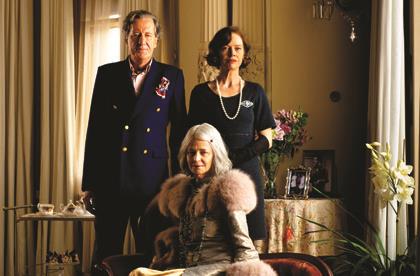 OVER his 40-year career, Fred Schepisi has worked with some of the biggest names ever to stalk the big screen — from comedy kings like Steve Martin, John Cleese and Will Smith to drama dons like Meryl Streep, Michael Caine and Sir Ian McKellan.

With anecdotes that would put hairs on your chest, Schepisi is arguably the most successful director to emerge from Australia’s film renaissance in the 1970s. His latest offering, The Eye of the Storm, is just his second film in the last ten years, and gets its UK premiere at this week’s hotly anticipated event  – FilmFest Australia in London.

The Eye of the Storm follows the return of two siblings (Aussies Geoffrey Rush and Judy Davis) to their childhood home as their rich elderly mother (Charlotte Rampling) plans to die. But they soon find out the controlling matriarch isn’t ready to cede control of her life – or theirs – just yet.

Set in the 1970s, the film harks back to an era where the class divide and growing sexual freedoms caused quite a fuss – eerily reminiscent of the West’s current financial crisis and the gay marriage debate.

“The film’s set in a world of the rich and privileged – when the sexual revolution hit Australia, and where the egalitarian qualities of society were coming to the fore,” Schepisi told Australian Times.

“It’s about to happen again. The old school ties with vast amounts of money who think they’re superior are discovering you can’t live life how you want without any recriminations.”

No stranger to controversy, Schepisi filmed A Cry in the Dark – the film that spawned the iconic line ‘the dingo’s got my baby!’ – during the famous trial. Likewise, The Chant of Jimmie Blacksmith, based on a true story about an exploited Aborigine who goes postal, turned him into somewhat of a pariah.

“My second film shocked the hell out of people and Australian newspapers took to me in a big way about the violence and attitudes to Aboriginals that they just couldn’t brook,” Schepisi said.

Unsurprisingly he upped and left for New York, joining the studio system that brought him into contact with A-listers and allowed him to make movies like Roxanne, Six Degrees of Separation and Last Orders.

“You go to America, get paid to do these films, and the first question I get asked is why I deserted the country and become a turncoat,” he said. “Tall poppy syndrome comes out a lot.”

Having returned to independent filmmaking, Schepisi has half a dozen projects on the go at all times, and enjoys working with his family. He readily admits that there are many links between his films and the work of his wife — an artist successful in her own right — and even directs his daughter as Geoffrey Rush’s love interest in The Eye of the Storm.

“When you see the film, notice how careful Rush is around her,” laughed Schepisi. “I couldn’t make the decision [to cast her], so I had the heads of departments and actors look at the contenders and they said ‘if you don’t use your daughter for this part, you’re absolutely nuts’.”

The Eye of the Storm will be showing as part of FilmFest Australia at the Clapham Picturehouse on 15 September and the Hackney Picturehouse on 23 September. For more details, head to FilmFestAustralia.org.uk