As Barry Humphries announces Dame Edna Everage's retirement with a final Eat, Pray, Laugh! UK tour, including a run at London's Palladium, we reflect on our top 5 Dame Edna career highlights as we prepare to say - Goodbye Possum!

by Poppy Damon
in Entertainment, Lifestyle 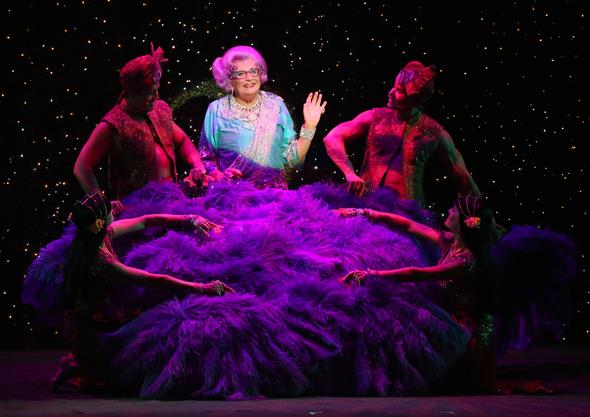 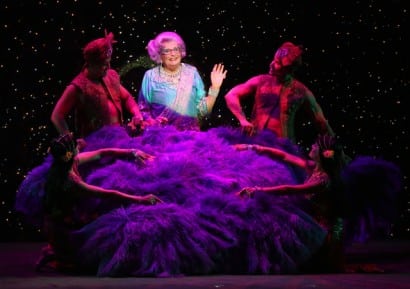 DAME Edna Everage has announced her final farewell tour after 57 years of entertainment, and it’s got our huge purple glasses all misty! We’ve been looking through our favourite lady’s huge repertoire of TV appearances to find our favourite moments and here’s what we came up with Possums.

Dancing With The Stars

Dame Edna is undoubtedly Australian TV royalty, so it was a huge blast of nostalgia to see her appearing as a guest star alongside Scary Spice and sexy Daniel MacPherson on Australia’s Dancing With The Stars last year; deflating all the egos of the minor stars attempting to reboot their careers on the show. It was all in good fun and definitely got us giggling. Let’s hope even in retirement she’ll pop back for surprise appearances like this.

Dame Edna became one of the toughest judges the show had ever seen when she took charge in a special episode of the UK cookery show for Comic Relief this year. It saw comedians Jack Whitehall and Micky Flanagan try to impress with their skills in the kitchen, although the great Dame decided Mr Flanagan’s John Dory didn’t “justify the death of a fish”.

This early 90s appearance, alongside Billie Jean King and Elton John, is a reminder of everything great about Edna. Not only does she steal the show, she manages to have everyone laughing (especially Billie Jean with a discussion about Edna’s gynaecologist) by being classically naughty and hilariously familiar with her fellow superstars.

Dame Edna on Top of the Pops

When our Dame performed on British TV Show ‘Top Of The Pops’ in 1979 she introduced the British public to ‘Waltzing Matilda’ — only The Dame Edna version. It is aptly described on YouTube as a wonderfully ‘kitschy novelty disco update of the traditional song’. Probably one of the weirdest pop-releases of the decade, make sure you take a chance to relive the joy of our de-facto national anthem as performed by Edna.

At the main concert at Buckingham Palace in June 2002 to mark the Queen’s Golden Jubilee, Lizzy’s entrance was preceded by an introduction by Dame Edna. Proclaiming the ‘Jubilee girl is here’ she welcomes the Queen and her hubby to the balcony where they watch on in amusement as Edna, casually addresses the royalty, warning Liz that the show is ‘really loud’.

Let us know your favourite Dame Edna moment in the comments below!

Dame Edna Everage has announced details of her farewell tour Eat Pray Laugh! which will cover the breadth and depth of the UK from October to spring 2014.

“I shall be saying farewell to my English possums,” she has announced. Dame Edna considers the show, which has already toured in Australia and New Zealand, her best yet.

Accompanied by inebriated cultural attaché the Honorable Sir Les Patterson and Sandy Stone, the irrepressible Dame Edna Everage will bid adieu to their London fans at the iconic London Palladium between 13 November and 5 January.

The Eat, Pray, Laugh! Barry Humphries Farewell Tour, directed by Simon Phillips, will then head on venues in a number of UK cities, including Leeds, Norwich, Glasgow and Manchester. The epic string of shows will also take in Milton Keynes and Edinburgh before it shows at the Palladium.

For more details on the full tour and dates see dameednafarewell.com or  for tickets to the London Palladium go to Seetickets.com or call 0844 811 0058.