Hard, brash and bloody loud. That describes most Australians but there are a few of us that rocked it more than just about anyone else on the planet. Hellraizers of Aussie rock, we salute you. 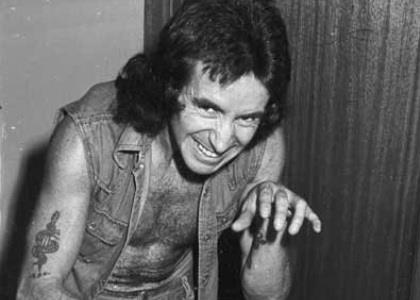 Season ticket on a one-way ride
Not just Australia’s; the World’s greatest rock n’ roll hellraiser. Ronald ‘Bonnie’ Scott survived a stint in a boys home and a 3 day coma following a drunken motorbike accident before auditioning to be AC/DC’s singer. Legend has it that when asked if he was ready for the try-out, he sucked down a joint and skulled a whole bottle of JD before confirming, “Now I’m ready.” Let there be rock, indeed. For him the ‘highway to hell’ truely had no stop signs or speed limits. On 19 February 1980, after a huge night out at what is now Koko in Camden, the great man was found dead in a mate’s car, parked at 67 Overhill Rd in East Dulwich, having choked on his own vomit. Back In Black, the band’s tribute to their fallen comrade, is the second biggest selling album of all time (after Thriller).

Check out this clip from an Australian television documentary about the late great AccaDacca frontman:


JOHNNY O’KEEFE
The REAL wild child
Known as ‘The Wild One’ after his self-penned signature tune — and yes, Iggy Pop’s cover you know from Rage. In 1956 he formed Australia’s very first rock n’ roll band, The Dee Jays, and supported the era’s biggest stars when they toured Downunder. Following Elvis’s death in 1977, O’Keefe is said to have remarked often, “I’ll be next”. Oz rock’s founder died a year later from a drug overdose. He remains, to this day, Australia’s greatest chart performer with twenty-nine top 40 hits.

Here ‘The Wild One’ tells us how he made all those hit records. It’s easy! Learn from the master …

JIMMY BARNES
More than cheap wine and rocket fuel
“I was doing about 10 grams of cocaine a day, maybe taking six or eight ecstasy pills and drinking three bottles of vodka – all in a day, every day.” And that was just his 1998 — 2002 bender! It makes Barnesy’s stint as the vodka sweating, Aussie pub rock defining frontman of Cold Chisel seem tame.

Sick to your freight train heart of Khe Sahn? There was so much more to ‘Chisel, and this, back when Barnesy really could sing, was perhaps their finest hour.

TIM ROGERS
Moon shines on trouble
Tim beat the crap out of Australian Idol judge Mark Holden atAdelaide airport and told Falls Festival punters that the music by the other performers was “hippy shit” before staggering off stage too drunk to play. He also heads up You Am I – the greatest Aussie rock band of the modern era. Dead-set legend.

Timmy and his mates at Camden’s Electric Ballroom in London back in 2010:

STEVIE WRIGHT
Let your hair hang down
The lead singer of The Easybeats in the 60’s, ‘Little Stevie’ is regarded as Australia’s first international rock star. In the 70’s, in an attempt to cure his substantial drug and alcohol addictions, Wright underwent deep sleep therapy, involving drug induced comas and electro-shock treatment, which left him partially brain damaged. A ‘supergroup’ of the contemporary oz rock establishment, calling themselves The Wrights, recorded his epic solo classic Evie (parts 1, 2 & 3) in 2005, primarily to raise money for his on-going care.

Check out this hilarious clip of Stevie from Hey, Hey It’s Saturday. Is he even lip-syncing to the same track?

Who’s in your top 5 Australian rock hellraizers? Have we missed someone? Comment below: