Australian folk singer/songwriter Darren Hanlon has had a career spanning more than a decade, five solo albums, three EPs and eight singles. If you haven't heard of him yet, GEORGE KATRALIS tells you why you should have. 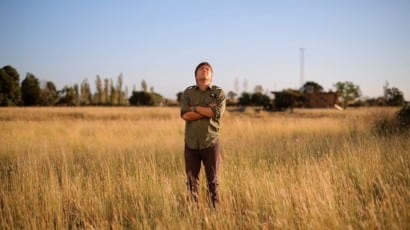 I CAN clearly remember the first time I heard of Darren Hanlon, an Australian urban folk singer and songwriter.

It was 2003, and a girl I worked with, with such incredible taste in music it could make Molly Meldrum stand up and take note, started talking to me about an up and coming artist by the name of Darren Hanlon.

She described him as a quirkier version of a banjo playing Russell Crowe, producing songs that would make me laugh, cry and dance all at the same time. Naturally I was intrigued, as I love doing two of the above three mentioned things.

I snatched myself up a copy of his Early Days EP and instantly I was hooked.

Nine years, five albums, and a whole lot of creative lyrical concepts later, Darren and I are well and truly invested in a long term and committed relationship… even if he doesn’t know about it.

For those who are unfamiliar with his work let me be the first to tell you — Darren Hanlon is the real deal.

What Darren does, and does well, is sees the little things in life that we all usually miss. When we’re heads down on the bus looking at the floor, or rushing through the weekend shoppers trying to find a gap in the crowd, Darren is observing it all. Examining the elements that make the world what it is, and then channeling his incredible gift for lyric and melody to turn those elements into words.

Tested positive for COVID-19? Here’s what happens next – and why day 5 is crucial

The most popular chick in New Zealand needs a name

However, don’t expect his tone to be entirely dedicated to one concept only. Quite the contrary — on each album you could expect to hear a heartfelt love song that would rival anything written by an accomplished crooner, coupled with a song about couch surfing and followed by one about accidentally grazing elbows with a famous actress.

“I wasn’t drawn to music, it was drawn to me. I couldn’t escape it,” says Darren to Australian Times about his beginnings in the Queensland town of Gympie.

Inspired by many mix-tapes provided by cousins, and live musical performances from his neighbours, he formed a very ‘about a boy-esq’ relationship with a music teacher from a rival high school. It was here a young Darren Hanlon was treated to a wealth of musical knowledge at a formidable age.

“Every afternoon would be a revelation. In his living room I heard for the first time REM, The Clash, The Triffids, The Go-Betweens, Sex Pistols and many other key acts.

“But just as important to me at the time were the lesser-known bands he put on the stereo. I loved the Honeys, the Skolars, the Particles, Wild Pumpkins at Midnight, lots of Australian Ska bands…so much stuff.”

It was these influences that led Darren to study music and join a few bands himself. Notably, and probably the biggest influence on his emerging career, Darren played guitar with The Simpletons — a very ‘Smiths’ sounding group, lead by songwriter Shane Gelagin.

“Shane and the band had a real buzz about them.

“I did love being part of a team. It was really exciting. I miss that part of the process the most these days.”

However, below the surface was a growing curiosity for the lyrical side of it all.

“I was in awe of Shane’s words, but was happy to be his guitarist. I remember wondering why I couldn’t do it.

“I knew I could sing ok, but songwriting didn’t come naturally. I think I got addicted to travel and adventure and I soon realised I’d need to start writing (songs) myself if I wanted to continue.”

As the clock saw out the 1990’s Darren turned his hand to songwriting, although shying away from the type of writing of many of his peers at the time that tried to capture the voice of a generation.

Instead, Darren decided to sing songs about falling in love with his hairdresser, sneaking into the movies, or personifying a Beta video machine. An element of unique quirkiness that would soon become the cornerstone of his twelve year career.

“I don’t set out to try and be funny,” says Darren.

“They’re all true things in my life. Most people have different sides to their personality. I’d feel strange if I just wrote songs from one part of mine, especially if it’s all serious and introspective.”

As the years have progressed, so has Darren’s outlook and approach. Not only towards his music and writing – but his overall development as an artist, and his presentation to the public eye.

This is reflected in his latest album I Will Love You at All, with a return to a simpler style.

“I wanted to make something simpler musically, more folk chords, less instruments, all to let the lyrics come through.

“I’ve been just singing the songs over and over with a guitar and kind of sculpting them out bit by bit. It feels more pure, organic and truer somehow.”

It is also reflected in the conscious effort Darren makes to create an original artwork for each album cover. It is an approach he adopted in 2006’s Fingertips and Mountaintops, which sported a very brightly painted artwork for the cover, and has followed ever since.

“I’d come around to the idea that every album cover from here on should have original artwork, something created especially (for it).”

For a man who was doing quirky-indie well before it was famous or cool to be a geek, Darren is humble in his approach to his own work and place in history.

When asked if he felt he was ahead of his time he quipped, “no way! I try not to think of who deserves what. Everyone has their place.”

For me, I’m personally not as humble as Mr Hanlon. It’s the real ones, the ones who aren’t in it just for a while, or because it’s cool, or something to do. Rather it’s the ones who just can’t help themselves but do what they do because they love it.

They to me have that lasting quality that the world deserves to see and hear, and that’s where Darren Hanlon shines most bright. What you see, is exactly what you get.

Watch the clip to ‘I Wish That I was Beautiful For You’:

Americans were alarmed last week when their president suggested on Twitter that the November 3 presidential election should be delayed...

Countless negotiations are underway around the world, the results of which will affect life and death. Strategies to distance leaders...

Not sure how to get your Instagram following up? We've got the solution that you are looking for.

With cases of COVID-19 on the rise, many Australians are asking: what happens if I test positive? With no known...