Cold Chisel – a very special blast from the past

REVIEW: Thirty years on, the passion and potency Cold Chisel displayed at the Shepherd's Bush Empire left me wondering what kind of dynamite they packed back in the 80s. 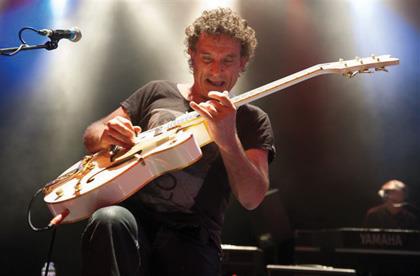 I often wonder what kind of gigs the big acts of the past were like back in their prime. Fast and furious? Sloppy? Would you, for instance, get into fights at the bar? Would a security guy tell you not to stand near the fire exit in 1982? Were the bar staff less like uni students and more like the gangsta mum from the Goonies?

If you saw Cold Chisel back in the day you are one of the lucky ones. Thirty years on, the passion and potency displayed at the Shepherd’s Bush Empire was pretty darn fresh for a Wednesday night. It left me wondering what kind of dynamite they packed back in the 80s.

Now we all know that Jimmy Barnes’ shrieking scream has become a corner stone of the Cold Chisel sound but it was Ian Moss’s crystal clear renditions of ‘My Baby’ and ‘Bow River’ that reminded the crowd of his awesome vocals and blues guitar licks (really highlighting the influences of B.B. King and Muddy Waters). Never one to back down from a challenge Barnsey came back with pitch perfect precision on (my personal highlight of the night) ‘Forever Now’.

Their voices are chalk and cheese but they provide such a colorful contrast that it’s magic when they sing with each other. Such strange stuff is this glue that holds them together. And then there’s Don Walker, the humble piano songsmith, crafting ‘Khe Sanh’ while Phil Small (bass) follows his lead with a minimalist playing style to get out of the way of both singers.

Legend has it that Mossy would wind up singing the songs Barnsey walked out on during his running battles with late drummer Steve Prestwich. Fueled with piss and vinegar and more flammable than a gas leak at a Zippo convention they would hurl insults back and forth til the microphone and drum sticks were dropped and it was on. But fast forward to Chisel’s first gig in the UK in thirty years and the loss of Prestwich is a terrible blow but his legacy lives on in his classics ‘Flame Trees’ and the slow encore ‘When the War is Over’.

The rest of the Chisel staples were all there too –  ‘Cheap Wine’, ‘You Got Nothing I Want’, ‘Four Walls’, ‘Standing on the Outside’ – all rubbing shoulders effortlessly with new additions ‘No Plans’ and the tongue in cheek Walker composition ‘Everybody’.

If the boys are playing near you again soon, put the shirt and tie away, slip on a bluey and go see them. But beware, the bar is set after that and there are precious few acts that will measure up. Long live Chisel.

Were you at the gig? Tell us what you thought, below …

View photos of the punters at the show. Were you there?