Circa, the highly acclaimed Australian contemporary circus company are touring the UK throughout May and June with two very distinct shows: Beyond and How Like An Angel. 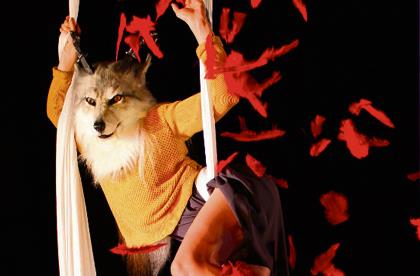 YARON Lifschitz admits he is “as physical as a turnip.” Given he is the CEO and Artistic Director of Circa, the world renowned Brisbane based contemporary circus company, an admission such as this may come as a surprise. But what this turnip lacks in physical strength, he makes up for in creative vision, not to mention a gifted knack for all things metaphorical.

“I had a group of performers, who got really obsessed by skills in a new show we were making. And just before we opened I said you realise everything you do can be done much better by a well-trained monkey. But actually, your humanity and the fact that you are human beings — a pretty weak shabby species — doing this, you guys are incredible.”

Since 2006, Circa have toured 24 countries, across five continents with their modern and unique take on classic circus performance.

“There’s this artistic conservatism that’s really endemic in circus and what we do is really break that.

“We use mainly acrobatics, tumbling, and a range of aerial routines, but it’s very stripped back, it doesn’t strive after effects.”

More than showcasing the talent and strength of the performers, Circa’s shows are also about exploring what Lifschitz describes as “the hidden poetics of circus”.

“There is something in this incredible, wonderful, blissful present art form that also moves you, but it’s not very obvious.

“Every show therefore has this commitment to finding this raw, pure emotion that is genuine and has an authenticity to it, but also is quite a new departure. All the works that we are bringing to the UK this year have that as their hallmark.”

Beyond is one of two Circa shows touring the UK in May and June. Based on Lifschitz’s description, Beyond has it all.

“In my mind it’s kind of cabaret meets dance theatre reimagined as circus.”

The London Wonderground at the Southbank Centre, where the show is being staged, has described Beyond as ‘Alice in Wonderland’ meets ‘1001 nights’.

“It’s six characters each taken through a little journey of their own. It’s all about our relationship between our inner and our outer lives, our inner animals and our outer humans. It’s very subtle, it’s not a story, there’s no preachy moral. Except to say that we all have animal drives, desires and forces within us, and we can’t become fully human and grown up until we unleash and acknowledge those,” Lifschitz explains.

The second offering is How Like an Angel, a contemporary spiritual piece performed in cathedrals. This Circa show wowed British audiences a year ago, and it has returned to the UK for a season of performances at the Brighton Festival, the Norfolk and Norwich Festival, the Salisbury Festival and a week of performances at the historic St Bartholomew-the-Great church in London.

Lifschitz attributes how amazing How Like An Angel is to three things.

“The first is that they allowed a bunch of rat bag carnies from Down Under into these cathedrals.

“The second thing is we work with I Fagiolini — nine world class singers who last year won the Gramophone Award. They’re as good as anyone in the business and they’re also awesome people. They explore (and) they challenge themselves in a way that’s good for us.

“The third thing is the synergy of the art, the architecture and the circus bodies, there is something fantastic about that.”

Conceptually, these two shows couldn’t be more different. But what they both offer, are experiences from the living heart of circus.

Audiences; prepare to be moved.

Want to win TWO tickets to Beyond at London’s Wonderground?

We’ve got two tickets to give away to Beyond at London’s Wonderground on your choice of the following dates (subject to availability): 3rd, 4th, 11th or 12th June 2013.

Competition closes 31 May and winner will be notified by email. Enter below.