REVIEW | Performing in the Spiegeltent at the London Wonderground, Beyond by Australian company Circa presents a variety of circus acts, but the strength of one performer steals the show. 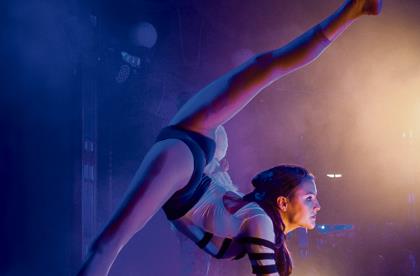 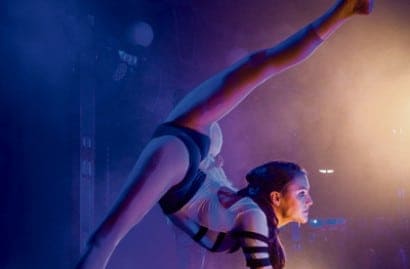 CIRCA, the Australian contemporary circus company unleashes the animal inhabiting each of us in their new show Beyond.

Not taking itself too seriously, the show features a cast dressed in animal costumes performing mainly aerial acts and acrobatics to show tunes including Frank Sinatra’s My Way and New York, New York.

Such an eclectic mix of music, circus and costume can be entertaining, but could be used to greater effect in this show.

For every ooh and ahh moment, there are just as many pffs. You sit wide-eyed watching a female aerial artist perform a complex strap routine with rapid movements. But when the next act involves two male performers making noises by squashing a plastic bottle, you can’t help but think maybe I need another drink (the bar is open throughout the performance).

One fluff act can add colour, but there are a few too many. I kind of wish the guy who fits his body through a tennis racket was overweight, or at least pretended to get stuck; something to heighten the degree of difficulty. And I’m not sure what to make of the guy balancing a piece of paper on his foot.

But Beyond has one major drawcard. Every circus needs a strongman. Someone to lift, hold, catch, support and carry the weight of the other artists. This role is often overlooked in favour of the person balancing, holding or hanging on by a thread. But when the strongman is a woman, your attention suddenly gravitates to the bottom of the human pyramid instead of the top.

The strongwoman in this show is incredible. Without even looking like (dare I say) a man, she makes carrying the weight of a couple of men at the same time look so easy. She even does it with a smile. She is also at the centre of one of the show’s most entertaining acts. With the odds stacked against her in the form of acrobats using her body as a balance beam she successfully manages to solve a Rubix cube. This feat was highly applauded.

More of those acts with multiple dimensions would have made this show much more dynamic. However if you’re after some light entertainment, it’s a good weight.