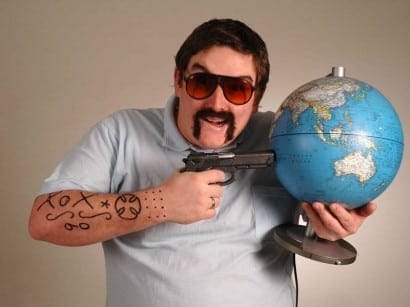 We asked Chopper (AKA Heath Franklin) to impart his wisdom and knowledge to our readers, ahead of this year’s Edinburgh Fringe Festival.

So you’re thinking about going to Edinburgh during the Fringe? Nice idea! In fact, fire trucking great idea!

I – Chopper – have been a couple of times so I have given it a bit of a sniff and a good look around. My first observation, maybe don’t give it a sniff. There are a lot of breweries so there can be a strong smell in the air of stale weet-bix farts (none of this stupid weet-a-bix crap where I’m writing this from). Anyway I digress, it is definitely worth looking at, the town goes absolutely mental for a month.

The Edinburgh Fringe Festival is a monster. A giant ravenous monster that takes performers and shreds them to pieces for fun, so only the foolhardy or the truly seasoned combat veterans dare register a show there. As a punter though, it is win win, because you either get to see something well crafted that is breathtaking and life altering and that makes you feel deeply and yearn to be better or, alternatively, you see some poor bastard slowly collapsing inward from regret like a tin can in a fire to a crowd of three (two free tickets and the sound guy).

I have heard ‘statistics’ about the festival when I was last there. Even though they are probably complete BS they at least go a long way to giving you an idea of what happens. One of them was that the population of Edinburgh goes from three hundred thousand to 1.2 million. Now, these may not be true, but it certainly that feels way. In fact unless you want to sleep in some carnie’s sock drawer you better get a place to sleep now.

Another claimed that there were 1500 shows, running almost 24 hrs a day! 500 of those were comedy shows and the average audience size was eight. Adam Hills was selling 600 tickets a night, so some poor bastard was balancing that out at the other end.

Basically Edinburgh turns in to a giant pile of monkeys with pick axes, all trying to hack their way to the top. It’s a party, but it’s brutal.

Eating in Edinburgh is easy, just get some dude to deep fry something for you. Some places will deep fry anything for a pound, burgers, BBQ ribs, sneakers, stray pets. You name it and someone is willing to batter it. As for Haggis, tatties and neeps, screw the tatties and neeps, but haggis is good gear. Get someone to put a slab of it on a burger and then deep fry that. I had some for breakfast once with seven other types of meat and eggs. I didn’t even know there were seven types of breakfast meat, but the Scottish have found them. “But I want to eat healthy, Chopper!” Well don’t bloody come to Edinburgh then!

You can walk pretty much everywhere but if you have to get up the steep hill from the new part of town to the castle YOU ABSOLUTELY HAVE TO GET A RICKSHAW. There is nothing better than having a wiry ginger dude pedal you up hill while you casually sit in the back making conversation that he is too breathless to reply to.

You have to go to Edinburgh for the festival, it’s amazing. But I guarantee it’s not like any other poxy festival you’ve been too. It will eat you alive if you turn your back on it. Hooroo.

When Australian Times asked Heath Franklin Chopper to describe the Edinburgh Fringe Festival in five ways, this is what he came up with:
Busy. Expensive. 7 types of meat. Enthusiastic uni theatre groups. Couches.

What would be your five words to describe Edinburgh’s Fringe? Tell us below: