The Block host Scott Cam has prevented Asher Keddie from making a clean sweep of the Logie Awards by taking out the Gold Logie. 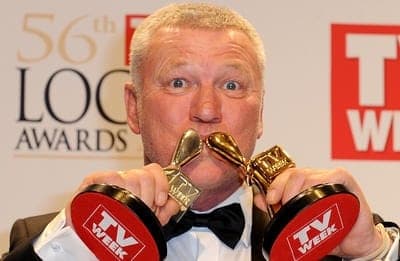 Jovial The Block host Scott Cam has won the coveted Gold Logie and prevented Asher Keddie from making a clean sweep of the awards night.

Cam was the hot favourite to win Gold on Sunday following a betting plunge a few weeks ago.

He said the highlight of winning was getting to kiss pop princess Kylie Minogue who presented the award.

“I kissed Kylie Minogue, that’s pretty cool,” Cam said when he stepped up to the microphone.

Offspring star and last year’s winner Asher Keddie was in line for a hat-trick after taking out the Silver Logies for Most Popular Actress and Most Outstanding Actress.

But Cam, who earlier won a Silver Logie for Most Popular Presenter, was standing in her way.

It’s the first time he has been nominated for Gold which is determined by a public vote.

Even Peacocke got the chance to take the stage as a winner after Home And Away won Most Popular Drama Program.

Cam said his three children would be proud of him winning the Gold Logie and would be at home “going berko”.

He promised to use his carpenter’s skills to good use and hollow out the bottom of the Logie and “make it into a stubby holder”.

Keddie’s two Silver Logie wins are a timely publicity boost for Offspring which returns on May 14.

An overwhelmed Keddie said she couldn’t think straight after getting a vote of confidence from her fans (Most Popular) and her peers (Most Outstanding).

She has now won five Logies in two years.

She said she wanted to dedicate her second Silver Logie to her “beautiful, incredibly talented and inspiring friend and colleague” the late Wendy Hughes.

“I’d like to dedicate this to her because she is a woman and an actress that I have admired since I was a little girl.”

Chris Lilley won most popular actor for his character as the obnoxious private school girl Ja’mie.

Lilley wasn’t able to collect his Logie in person, sending a videotaped message, saying he was in London promoting his latest comedy, Jonah From Tonga.

But he did send one of “Ja’mie’s” friends Kwami (actor Albert Mambo) to accept the award.

By Darren Cartwright And Melissa Jenkins