Brissie ‘Boylesque’ at its Best – Briefs, The Second Coming

Calling all lovers of circus, sequins and six-inch heels! The all-male burlesque boys from Brissie are back with their latest show Briefs: The Second Coming. KIM SEELIGER managed to catch the opening night in Brisbane before the start of their three-month tour of Europe.

by Kim Seeliger
in Lifestyle 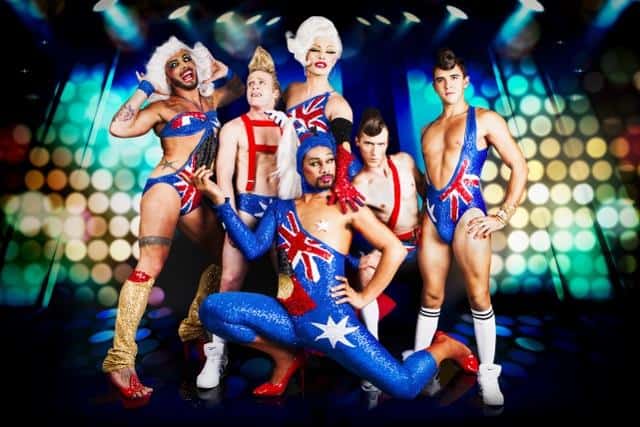 ‘ALL MALE, all vaudeville, all trash’ is the tag line and it couldn’t be truer. Briefs is a cult variety show bursting at the seams with circus, drag artistry, acrobatics, magic, comedy, clowning and a good dose of Aussie humour.

I was lucky enough to attend opening night at Brisbane’s premier performing arts venue, the Powerhouse, ahead of their three month tour of Europe, including a stint at the Edinburgh Fringe. The venue was packed with an audience visibly eager for the night’s entertainment.

Briefs began its humble performance beginnings in the back of a West End bookstore in Brisbane in late 2008. What followed was a string of late night circus cabarets in and around the city, performances at the Adelaide Fringe Festival, as well as in Melbourne and Sydney, and then international tours to Edinburgh and London.

Combining raw talent, glittering costumes that rival those from Priscilla, and enough naked sweaty skin to set even the most latent gaydar on fire, the six performers that make up the Briefs ensemble are vibrating with energy and skill.

There’s Mark ‘Captain Kidd’ Winmill, the ‘King of Boylesque’. Mark won the title of Most Dazzling Performer in the Boylesque category at the Burlesque Hall of Fame Weekend in Las Vegas two years ago. His trapeze routine, complete with exquisite feathered headdress and blue-sequinned g-string, put his skills in circus, drag, and striptease seduction to testament. The hooligan acrobatics of clown Tom Flanagan are a pure joy to watch, as is the serious skill and strength of circus star Ben Lewis.

The glamorous yet sometimes startling drag artist Dallas Dellaforce has as many sides to her as a rubik’s cube (which also makes an appearance in the show) and watching her strut her stuff on stage is addictive. She brings “drag artistry and theatre to a new level”, says creative producer and fellow performer Fez Faanana, aka Shivanna Cumminatcha, the hilarious Samoan host of the show. The youngest member of the troupe is the fresh-faced juggler and “circus brat” Louis Biggs, from Albury Wadonga.

I can’t decide if it’s the yellow crochet willy warmer or the informal moments of pure hilarity that got me, but I’m hooked. It’s trashy, camp, seductive, entertaining, and mind-bogglingly free of boundaries!

Catch Briefs: The Second Coming at the following venues in the UK this summer:

For more info, check out briefsboys.com.