"All the way from the suburban backwaters of Australia and direct from a string of sell out shows in London, comes a full throttle, high octane game show with balls. It's bingo, but don't bring your Grandma." 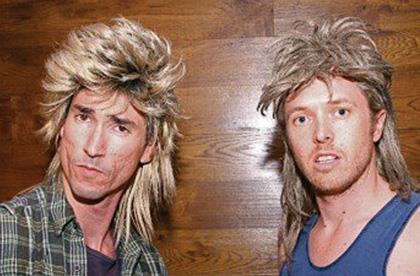 Bogan Bingo has been a firm fixture on the alternative nightlife scene in London for sometime now, and this year the Bogans – Tim and Trev – from the backwaters of Australia are taking a step onto the world stage at the 2012 Edinburgh Fringe Festival. They’ve secured a brilliant venue (Laughing Horse @ The Free Sisters) and a great time slot (21:30) for three weeks but being good Bogans they’ve seriously under estimated what it takes to get there. So, lacking some serious cash, they are embarking on a fundraising campaign that they hope will raise enough to get them to the bright lights of Edinburgh and closer to that dream of Bogan world domination.

Tim and Trev have decided to auction off their famous (bingo) balls and give punters the chance to win some seriously sweet prizes by sponsoring a ball in their ‘Balls of Glory’ competition. The prizes for the raffle add up to over £3000 and have come from Stoke Travel, Wicked Campers, McGuigan Wines and The Underdog Clapham Common.

But wait – there’s more!! If a company, syndicate (of mates) or even just an individual were to pledge £200 to the Bogans – they’d throw in a personal thank you and probably a few over enthusiastic hugs from the boys when they come around to your place and cook a BBQ for you and three mates (London only). They bring everything including the barbie, all food and an esky full of beers.

To help the battlers out, head to wefund.com/project/bogan-bingo-edinburgh-fringe/p32928/

While Tim and Trev are at the Fringe, their good mates Damo and Benny will be holding the fort, rolling out Bogan Bingo as as usual every Thursday night at The Underdog in Clapham Common.