Australian fans of pop sensation Miley Cyrus can prepare themselves for a good dose of twerking, tongue flashing and less than skimpy outfits when the pop star tours Down Under in October. 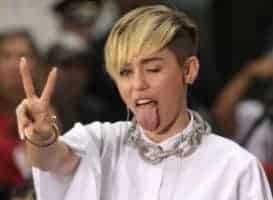 Miley Cyrus is bound to bring her usual dose of shock value to Australian stages when she tours Australia later this year.

If you are not a fan of the twirking-tongue-wagging-scantily-clad-post-teen best you find a cave somewhere in the Outback around October 2014.  If you don’t, consider yourself warned, the pop diva will make news occupying endless streams of Twitter and Facebook feeds.

But good old Miley is one of the believers of the school of thought that any and all publicity is good publicity so who knows what awaits Australian fans.  One thing is as sure as death and taxes it will be an entertaining show and people WILL be talking about it.