INTERVIEW | Adam Pretty and Ryan Pierse, winner and runner-up of the title of Sport Photographer of the Year at the Sony World Photography Awards in London, talk to Australian Times. 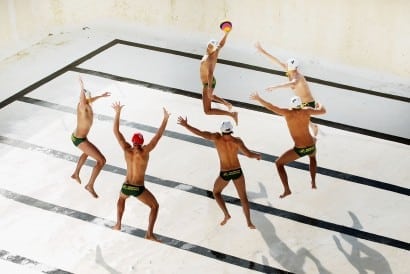 OUR athletes may have had a tough time getting gold during the 2012 London Olympics, but two Aussies have now been named winners for their work at the international sporting event — albeit several months later, and not for sport.

Australian photographer Adam Pretty has received the prestigious title of Sport Photographer of the Year at the Sony World Photography Awards, and Ryan Pierse has been named in second place.  Both were selected from a field of over 122,000 submissions from 170 different countries.

Adam Pretty and Ryan Pierse spoke to Australian Times about the competition, the London Olympics, and their journey to becoming award-winning specialist sports photographers with Getty Images.

Pretty is not a first-time winner in this field, having received many accolades in the past including prizes from World Press Photo and Pictures of the Year International.

“I’ve been very fortunate with awards over the years,” he says modestly.

“I was happy with my folio, but it’s so subjective, with different judges at every competition. You just never know.”

Pretty has been a keen sports photographer since his early twenties and has travelled the world for his work, visiting and taking shots across the US, Europe, Asia and the Middle East.

His winning series for the Sony World Photography Awards, entitled Olympic Journey 2012, turned heads for its visually spectacular black and white photographs of some of the 2012 Games most iconic moments.

“Because they had such tight deadlines, I didn’t even look at my pictures throughout the Games. It wasn’t until about a month after I sat down and went through all the raw files on the hard drive,” laughs Pretty.

“I forgot I shot half the stuff because, well, you’re not sleeping.”

Pierse, who also works for Getty, was praised for his series of witty images of the Australian men’s Olympic water polo team training in an empty pool. The Sydney-based photographer says he is honoured to be prize-winner in this competition, as Sony has a reputation for selecting unique and innovative images.

“Most photographers will always try to get that different picture, something away from the day-to-day standard photos, so to be a prize winner in a competition like that is a great honour,” he says.

“That’s a really nice award because it’s voted on by your peers,” he explains.

Both photographers developed an interest in sports photography in their high school years, working as newspaper photographers from a fairly young age until joining Getty Images — Pretty in 1998 and Pierse in 2004.

“I started taking pictures at school during year 11 and 12 at high school in Melbourne,” says Pierse.

“I always wanted to be involved in sport at the highest level in some way, and if I wasn’t going to be playing sport, I thought being in the media might be a good back up.”

Pretty on the other hand once planned to work his magic as a cartoonist, discovering a love of photography by accident.

“I did work experience with the cartoonist at the Sydney Morning Herald, but he had to go overseas at one point, so I was just sort of hanging around the office. The photographer felt sorry for me and asked if I wanted to go out with him instead,” explains Pretty.

Pretty describes getting the job at Getty Images as “a dream come true”. He went on to photograph major sporting events in Australia, including the Sydney Olympic Games in 2000. Since then he has shot at the Athens Olympics, Beijing Olympics and of course, London. Pierse follows closely behind, also being selected to cover both Beijing and London.

“The Olympic Games is tough, probably the toughest thing you can do as a sports photographer because it just doesn’t stop,” says Pretty.

“Just doing the underwater stuff, the amount of gear you have to travel around with, the hours you put into it – it’s crazy. It really wears you out, so it’s good to specialise a bit more.”

Both Pretty and Pierse consider their specialty to be watersports, due to the unique and unpredictable nature of water when captured in a photograph.

“Water shots are a little bit more difficult,” says Pretty. His work at the Games was predominantly at the Aquatic Centre.

“It means you can get some slightly different pictures. I try to not take obvious pictures because it’s tough with the Olympics to get a picture used – there’s thousands of photographers.”

As for their work overseas, Pretty can boast time shooting major events all over the world – his most recent work trips being based in Jordan, Vietnam and Tokyo, the latter of which he now calls home. Pierse, on the other hand, can relate to our readers after spending time as an expat working in London from 2006 until 2010.

“The range of sports you can cover living in Europe far outweighs what you can back in Australia. Everywhere you look in Europe there’s a high profile sporting event going on,” he says excitedly.

“London is such a good melting pot of a city. People care about things that happen in London, people are listening, people are watching.”

As we well know however, it’s not all glitz and glamour. Pierse concedes the weather can be a bit tough at times.

“If only London had a few more nice beaches, I might still be there!” he adds.

Pierse will be returning to catch the Sony exhibition in a few months while shooting the Ashes cricket series, while Pretty was specially flown to London by the Sony World Photography Organisation and presented with his award during a gala ceremony.

Despite his accomplishments, Pretty remains incredibly humble about his work.

“Every time you win an award it could be the last award you ever win in your life. And I try to tell myself that,” he says.

“I’ve won some awards, but I don’t want it to get my head. I want to keep working as hard as I did before I won anything.”

The 2013 Sony World Photography Awards Exhibition will display the work of all shortlisted photographers at Somerset House from 26 April ­— 12 May. For more information, visit worldphoto.org.