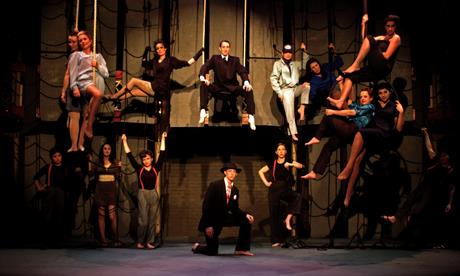 WHEN love is described as a leap of faith, many will wonder – what awaits them at the bottom? For the members of circus group Airealism, the answer is often the wooden floorboards of an old London theatre.

Without so much as a safety mat, I watched teachers, writers, engineers and research assistants take the plunge in an aerial arts show, themed around love. The Bleeding Hearts Circus, performed in the intimate Hoxton Hall, was a unique yet relatable tribute to love in all its forms, from tumultuous twists and passionate embraces to sexual balancing acts and courageous jumps.

The lights come on to reveal Noa Manor’s ‘The Wanderer’ – a bumbling mime who appears intermittently, serving as a frame between acts. Though not the main focus of the programme, the pseudo-slapstick act embodied by Manor was, at times, a little tired. The act improved, most notably with a comedic roller-skating set, as well as one scene where, due to unrequited love, she brandished a knife at first thought for self-harm, but then used to cut a slice of chocolate cake for emotional binge eating. Certainly something we have all experienced.

The aerial tricks ranged from silks to hoops, ropes to bars, and one particularly titillating pole dance. There were some saucy single performers, including Amber Wells’ cute 1950s pin-up girl act, and Andre Glazier’s incredibly entertaining strip tease. Others involved gripping emotional turmoil, including Hannah Cushion’s Heart Strings piece and Julie Yeung’s Eternal Love, where impressive stunts became only a side show to how the body can express untapped emotion.

But no less impressive was group work, with duos such as the near-identical Lilith Sumersar-Rai (also co-director) and Miranda Atkins, with their Squid Love piece, an act which combined silk and hoop tricks, with a lot of muscle, innocence and grace.

Following intermission we were treated to Deep Inside My Love with a near naked couple doing tricks ranging from ropes to silks to poles to body work in what I can only interpret as an exploration of sexual desire, with sometimes an underlying feeling of fear and loneliness. The two performers split at some points in what felt more like two solos, occurring simultaneously. They left the audience somewhat breathless and engaged, while also wishing we looked that good in knickers.

Some more light-hearted group work was enjoyed with Cupidity — three vibrant young ladies dressed as ‘stupid cupids’, performing choreographed bar work with a sense of fun and frivolity, though with moves no less impressive.

It’s a difficult choice but my favourite for the night was a performance by Nikki Rummer and JD Brousse’ with My Angel Rocks Me Back And Forth — no aerial tricks, merely two people working with each others gifts and weaknesses. As testimonial to the raw battles of the heart, this power couple were stretched and pulled, fallen and caught, and Nikki Rummer was certainly not strong for a girl so much as she was just strong.

Aussie Emelia Holdaway — along with co-directors Matilda Andersson and Lilith Sumesar-Rai – successfully drew parallels between love and circus arts, with leaps of faith aplenty, coupled with enjoyable music numbers from various pop generations. Though what really completes the picture of The Bleeding Hearts Circus was the simple knowledge that all performers have full-time day jobs helped the group to capitalise on the appreciation of the audience.

With global phenomenon like Cirque du Soleil wowing audiences with surreal, almost inhuman abilities, The Bleeding Hearts Circus allowed a new perspective on aerial performance where not every artist was a pro, not every movement was in time, but every trick was that much more impressive because they are performed by someone just like you and me.

You want them to do well, with the added risk of not knowing exactly what to expect, as every fall, twirl or leap kept us that little bit more on the edge of our seat (with much audible gasping to prove it). On another level, Airealism has not only entertained, but inspired more people to get involved in the circus arts, with murmurs asking “if they can do it, maybe I can too.”

Be sure to check out future shows by Airealism, where the circus arts have been proven a creative means of falling in love… or in the very least, falling.