A special taste of the Canary Islands

CHRIS'S KITCHEN | Having just returned from the Canary Islands I can safely announce that the local culture and cuisine is indeed alive and thriving there. And boy is it tasty!

by Chris Arkadieff
in Lifestyle 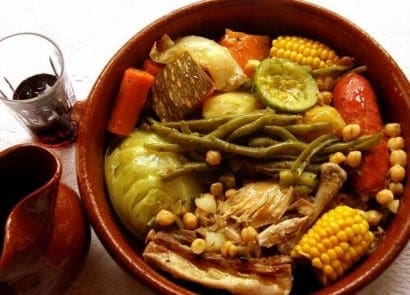 HAVING just returned from the Canary Islands  I can safely announce that the local culture and cuisine is indeed alive and thriving there. After many years of avoiding the region, thinking it a Brit Euro-trap, an opportunity to surf some awesome breaks with friends has changed my opinion that the Canary Islands are not just a haven for the Poms and their fry ups but in fact something a little bit special.

For those that are not familiar with the Canary Islands, let’s have a quick history lesson to update us on the unique region. The Canaries are a group of islands located off northern Africa, drenched with a sub tropical climate. The latitude and location mean they are perfect for growing a diverse variety of foods and they’ve got a coastline abundant with seafood.

The Canaries were discovered by the Spanish in the 14th century and quickly became a stopover port for returning ships from the Americas. This had a knock on effect for the region, the cuisine and the crops that were introduced to the area. Influences from Spain, central and southern Americas and Latin America were married with the abundance of seafood and the appetite of the European explorers. Goats and sheep were introduced and have today lead to some first class cheeses being served in Tapas bars and restaurants.

So, what does this mean for us Aussies? Basically, it’s a great destination to go to for endless beaches and fabulous food. A list below is a few dishes to look out for in the tapas bars and restaurants. A handy tip is to look for a restaurant without anything written in English and then pluck up the courage to avoid the stares of locals when entering this eatery solely dominated by locals. Let me tell you, it’s well worth the effort!

Here is my quick fire list of ingredients and dishes I tried out while enjoying the warmer weather.

Not only is the food full of flavour but don’t pass up the opportunity to try a few local wines from Tenerife which were honestly really good. (Oh, the surfing was pretty sick too!) Enjoy…

Where is your favourite exotic spot that has cuisine to die for? Tell us below:

Yes, there are millionaires who pay no tax, but crimping deductions mightn’t help

The results show that countries with carbon prices on average have annual carbon dioxide emissions growth rates that are about...

The iconic Hollywood sign in the hills above the movie capital of the world turns 97 this year. And, like...

China’s enforcement of a new security law in Hong Kong marks the de facto end of the “one country, two...

Flock of emus divided the town when they suddenly arrived last year. Now they’ve departed just as quickly and Nannup...

To slow the spread of the disease, we need to better understand why some places have higher numbers of cases...