A pudding by any other name

CHRIS’S KITCHEN | Serving up the traditional British delicacy of Black Pudding this week is our Aussie man in the kitchen. Just don’t ask him what it’s made of….

by Chris Arkadieff
in Lifestyle, Recipes 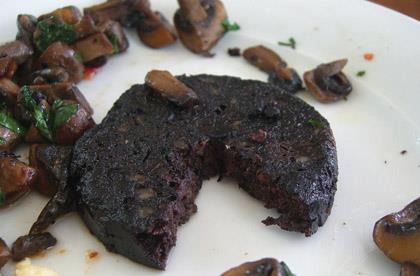 THOSE new to the shores of Britain – and new to the English breakfast fry-up – may well be wondering what exactly is that dark-white speckled sausage-like meat resting alongside my fried eggs and beans.

Most of us will never forget the first time we tasted this rich, grainy textured sausage that graced our plates. Although it may be delicious from the first mouthful, our perception quickly changes from good to bad when someone tells us what actually goes into it. Which is, essentially, blood. However, as history shows, there are far worse things out there to eat.

The history of black pudding is hard to identify, but it is said that wherever there were animals used for food production a version of black pudding developed. Adopting the policy of never wasting anything from a slaughtered animal, the animals blood soon became a delicacy, and useful in enriching foods for consumption.

Black pudding has now developed a firm following here in the UK, even to the point where there is now an annual World Black Pudding Throwing Championships held in Yorkshire.

The more traditional way we find black pudding is on our plates, in the form of a sausage made from blood combined with oatmeal, barley and onions. Generally these were the most abundant ingredients found on farm lands centuries ago, and formed what was referred to as a ‘poor man’s sausage’. Recipes were a closely guarded secret and handed down from one generation to the next.

Black pudding sausages are packed full of flavour, and the best way of cooking them is pan-frying and grilling. Perfect for breakfast or pairing with game, chicken or a tasty mixed grill on a Sunday morning. In the restaurant we’ve paired it with fresh seared scallops — a perfect match.

This week’s recipe is simple and easy to add to your favourite breakfast — just like flash frying a minute steak on the BBQ. You can buy black pudding from your local butcher, or most large supermarkets will have it stocked on the shelves.

To cook it, take a sharp knife and slice the sausage into 5cm thick discs. Take a medium hot pan and a good splash of oil. Carefully place the discs in the pan and allow the pudding to sear for two minutes on each side. It will be ready when the outer face has a nice crisp finish.

It’s that simple! Pair it with its perfect partner — fresh fried eggs, splash with some brown sauce and then enjoy!