Fringe favourites of the highest mark. 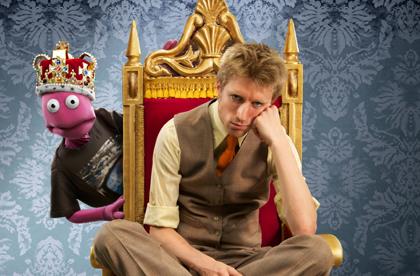 SAMMY J & RANDY: Fringe favourites of the highest mark, the skinny man and his purple sidekick are back with a ghost story with a twist. Legends in Australia, legends at the Fringe!

FELICITY WARD: Australian comic Felicity last came to the Fringe in 2009 and her new show The Hedgehog Dilemma garnered her awards at every single Aussie festival this year and amazing reviews in the Australian press. Her show is about human intimacy – a heartfelt and personal story, yet hilariously told – Flick talks about her break up, alcoholism and getting her life back on track after an eight year destructive relationship.

SHANE DUNDAS: A legend in the comedy world as one half of the hugely popular Umbilical Brothers, Shane Dundas has performed for the Queen at the Royal Variety Performance, appeared at Woodstock ’99 in front of 100,000 people, and gigged on Jay Leno’s Tonight Show with their second biggest US fan Robin Williams. But nothing has scared him as much as the leap he’s about to take into the unknown, as he performs his own solo show, Believe. Can he do it, without the security of a double act?