REVIEW | A new wedding day disaster movie from the director of Priscilla is set to screen at FilmFest Australia this month and will most likely appeal to gross-out comedy fans (and long suffering Olivia Newton-John aficionados). 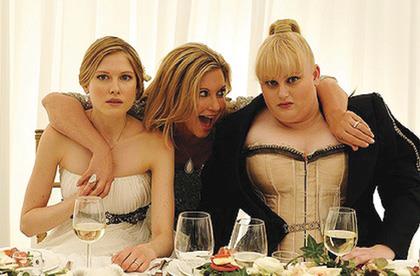 The opening scenes of director Stephan Elliott’s new flick A Few Best Men will be familiar to more than a few Aussie backpackers living in the capital.

“Holiday flings are meant to end at the airport bruv, not at the altar,” moans one.

Undeterred, David invites his laddish mates — obnoxious ringleader Tom (Kris Marshall), neurotic Graham (Kevin Bishop) and recently-dumped depressive Luke (Tim Draxl) — to travel Down Under for his hastily arranged wedding to Mia, who just happens to be the daughter of a wealthy, power-mad politician (Jonathan Biggins) and a repressed, trophy wife (Olivia Newton-John).

Written by Dean Craig (Death At A Funeral), the film starts off promisingly with some genuine laughs as David’s uncouth mates descend on Mia’s posh Blue Mountains home and meet the future in-laws. Keen to celebrate their mate’s last night of freedom, the boys embark on a carnage-filled stag night, inadvertently ripping off a deranged drug-dealer and dissing the father-of-the-bride’s prized campaign mascot, Ramsy the Merino ram.

The film begins to go a bit off the boil on the morning of the nuptials. It descends into crude comedy, as the boys lurch from one cringeworthy disaster to another while the hapless David tries desperately to salvage his big day. If you’re a fan of this type of comedy (and there were plenty of laughs in the screening I went to), you’ll enjoy the most toe-curling best man’s speech ever and Olivia Newton-John’s unlikely turn as the closet coke-fiend mother-in-law let loose.

Granted, it’s not in the same league as other wedding-themed disaster flicks such as The Hangover or Bridesmaids, but if you know what you’re in for (gross-out, frat-boy humour), A Few Best Men will definitely get you giggling.

‘A Few Best Men’ is screening at the Clapham Picturehouse on 14 September for FilmFest Australia and is in UK cinemas now. For more details, head to FilmFestAustralia.org.uk