What if the royal baby was raised as an Australian?

ROYAL BABY | On the eve of the birth of the next heir to the British crown, how do we ensure the monarchy remains relevant to Australia? Why, raise the baby Down Under of course. 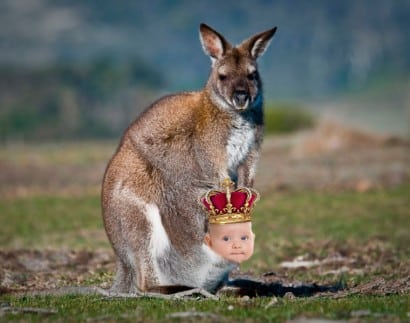 WE ALL know the stereotype that characterises the British monarchy: they are an out-of-touch group of aristocrats sipping expensive champagne out of crystal flutes as they walk their multitude of corgis around the grounds of Buckingham Palace wondering why ‘the common folk’ just don’t love them like they should.

When the Duchess of Cambridge gives birth this month, her child will eventually become leader of the British monarchy and, as such, the Commonwealth of Nations. The monarchy is entering a time of renewal and resurgent popularity, with the royal baby signalling that change is on the way.

A significant aspect of the republican movement within Australia is the argument that a nation like ours deserves a head of state that is, in fact, Australian. How do we reconcile the excitement of the royal baby with this urge for an Australian head of state? Hold that thought. Perhaps there is a way that we can have both.

It is a well-known fact that the royal family have a soft spot for Australia. Prince Charles went to school in Geelong as a boy, Prince Harry worked as a jackaroo in Australia during his gap year and Prince William once registered his interest in the role of Australia’s Governor-General. If the royal family have any hope of stemming the tide of Australian republicanism, there is a simple way to give us what we want: raise the baby as an Australian.

Hear me out: it is not unthinkable that the head of the Commonwealth should be from a country other than the United Kingdom. It would be equally valid for a Kiwi or a Fijian to rule as monarch over Australia as it would be for the British Queen Elizabeth II. Maybe by raising the royal baby as an Australian, we could be placated by the thought that one day a King Wally or Queen Charlene would sit on the throne.

How would the royal baby turn out if it was raised in the Australian way of life? Forget corgis and champagne, an Australian monarch wouldn’t be found without a cattle dog and a carton of XXXX. The gold-leafed gates of Buckingham Palace would be torn away and sold for scrap metal. After all, an electric fence rigged up to a car battery is far more effective.

We all know polo is for pansies and mummy’s boys, so that would be off the social calendar while King Barry I reigned over the monarchy. Instead, the aristocracy would focus their attention on a more masculine sport, like rugby league. They wouldn’t go to the games of course, making the trek to the local TAB instead to have a punt and crowd around small screens with a couple of schooners.

Did I not mention that pints would be eradicated under an Australian monarch? Horrible, I know, but it can’t all be positive can it? No, the entire monarchy would fall under a standardised system of pots and schooners with the option of a goon bag if the occasion calls for it.

Imagine the Australian monarch’s Diamond Jubilee (long may they live!): the horse-drawn carriages would be replaced by Holden utes, with every member of the royal family comfortably nestled in the tray wearing a Billabong hoodie and a pair of worn-down thongs. And forget about that silly, long-winded procession down the Thames: the Australian monarch would take a jet-ski instead, drenching onlookers with spray as they zoomed on by.

The monarchy has, over time, become a mostly ceremonial institution. Under an Australian monarch, that would all change. Trouble with Zimbabwe? Send in Prince Robbo to tell Mugabe to “have a breather and a lie down, mate.” South Africa in turmoil? Princess Shazza will “sort it out, no dramas love.” Police action needed in the Solomon Islands? Queen Cheryl-Lynn will call them all “a bunch of gallahs” and then “sack the lot of them.”

It is quite clear that raising the royal baby in Australia is the best option remaining to preserve the monarchy. A monarch raised in Australia, aside from staving off calls for a republic, would actually prove to be the most low maintenance and effective kind of royal there could possibly be.

As the media scrum gathers to await word of the Duchess of Cambridge going into labour, I send this plea to the royal family: when it comes to filling in the child’s birth certificate, don’t give it a name like Victoria or George. Call it Barry or Sheila, and send ‘em down our way.