ASTUTE AUSSIE IN LONDON | One of the key factors in being a successful leader is the ability to connect and build rapport with those around you. When it comes to effective communication, face-to-face will always win out over texts. 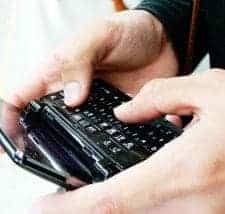 IMAGINE Sir Alan Sugar’s boardroom. Three nervous Apprentices sitting on one side, playing with their mobiles. Without a word, Sir Alan lifts his finger. But, instead of pointing and saying “You’re fired!” he silently pushes the send button on his mobile phone. Each Apprentice nervously waits to hear their phone go off. Not very compelling TV, but if the latest trend of firing by text continues, it could be the norm for workplace sackings. As technology becomes more prevalent at work, we need to start asking, “When is it a step too far?”

A few years ago, I learnt that a leading firm was sending its graduates text messages to confirm interview times. From an efficiency point of view and keeping up with Generation Y, it seemed to make sense. I did raise an eyebrow, but caught myself before I started saying “In my day…”

Last year an Australian company was criticised by the Fair Work Australia Commissioner for firing an employee via text message. The Commissioner pointed out that the employee had no right of reply and that hiding behind a text showed a lack of courage. Yet only a year later, when a similar case emerged the Commissioner’s stance was less critical. The Commissioner simply recommended that a face to face meeting might have been better. Despite the questions over the legalities and ethics of firing by text, it seems to be gaining popularity.

What is a step too far? Employee appraisals by text? So much of what happens in our professional lives is now online or virtual. Our workplace habits then permeate into our personal lives. We send texts when we do not want to talk to people. We send e-cards instead of hand written notes of love and appreciation.

However, when it comes to sharing important information, nothing beats face to face meetings. Sitting opposite someone and feeling their energy, seeing their body language and making eye contact all provide valuable information about what is being said. Face to face contact is important in building understanding, empathy and rapport. Putting a person behind the employee number, salary in a spreadsheet or headcount can change our behaviour. As leaders, we can make better decisions when we experience people, rather than a name or number on a screen. This is why Friday night drinks and team outings, rather than virtual meetings, build rapport more effectively.

Leaders are often told to use emotional intelligence and lead with authenticity. One of the key factors in leading successfully is the ability to connect and build rapport with those around you. No amount of training can overcome a tendency to hide behind technology to pass on critical or sensitive information.

Technology is a great tool. But hiding behind technology to avoid what can be perceived as difficult situations, tends to take away the humanity in being human. We all need to feel respected and visible. This can only be achieved when there is the right type of interaction. It takes a great leader to buck up and pass on a message without hiding behind a text.