Career isn't everything and why be rich when you can travel and have the time of your life?

by Lee Tobin
in Expat Life 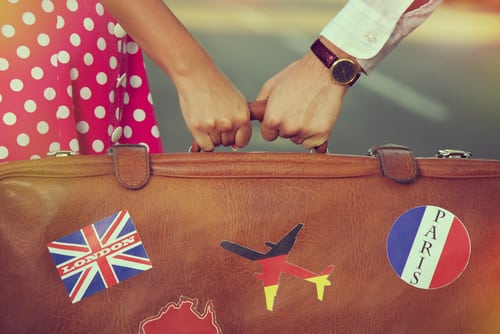 Some years ago now I left that big mass of sun-scorched land we call Down Under for London, a city ranked among the world’s most expensive to live and work in.

My upbringing was modest, sure. But, like many Aussies, I enjoyed a fairly carefree lifestyle back home. Despite studying full-time, I independently spent and saved enough cash to sustain a life of relative luxury and a latter adventure overseas. I always maintained that hard work would, in the end, pay off – because that is what my country allowed me to believe.

That was until I landed in the city in which, perhaps more figuratively than literally, it always rains. A place in which 75 quid would barely afford you a week’s board in a shoebox. Working for as low as £6.50 an hour in this type of climate did, very quickly, lend itself to a life lesson or two.

Do you really need all those ‘things’?

I used to love ‘things’. For example, truckloads of cosmetics and other useless and largely unused beauty products spilled from my every bathroom draw and bedroom cupboard. Hell…if you can afford it, right?

This kind of thinking – this excessive and mindless consumption – needs to stop. Just stop!

Don’t get me wrong, material longings are hard to dispel entirely and I am a lady who certainly likes her ‘things’. Certainly, it is okay to splurge sometimes, but there is a better high.

Yes, people, I am talking about travel

Sipping a cafe creme in quaint Parisian coffee shops. Marvelling at the grand gothic architecture of Budapest and Bratislava. Learning Sicilian slang with the locals in Catania. Soaking up the rays on the beaches of Nice, Crete and Barcelona. Seeing, doing, tasting, smelling, being everything.

I am yet to meet one person who regrets seeing the world. Not one.

Europe, in particular, is a backpacker’s dream. There is never a shortage of cheap accommodation and travel options. Even on London wages, it is possible. Save your pennies and pounds. Make sacrifices. Get out there. This is what matters.

It also feels really awesome to de-clutter your life. Learn to live from your backpack.

Your career isn’t everything

I’ve always been an overachiever/borderline nerd. While many university students spend their spare time partying, I was often found pitching stories to editors or perfecting my latest journalism assignment. As a result, I scored a rare media job well before graduation.

I probably could have skyrocketed up the career ladder in Australia. Still so early in my twenties, though, the togetherness of my life terrified me. What next? Marriage, four kids?

Instead I slept in a living room-cum-bedroom with my 21-year-old sister in a tiny East London share flat where we once found a decomposed rat under the fridge. While my job in media relations was rewarding, I was underemployed and paid so little I couldn’t select the £2.50 organic spinach over the supermarket own-brand without intense feelings of guilt and trepidation.

The riches of travel

For some time, I wasted away my university degree mindlessly in retail and hospitality gigs, shedding the occasional tear about it too (she had such promise!). Would I go back in time? Trade my often hobo-like overseas experience for a fatter pay envelope in the city I was born? No way in hell. It’s a cliché, but you really are only young once. A nice full bank account will (hopefully) come one day.

That day doesn’t have to be now. Today, happily eat a packed lunch on the train from Rome to Naples or a bus through Scandinavia in a tatty charity shop outfit. Lobster and evening dresses are for later.

Get rich – in experience, not pounds.