It is hard for an Aussie to live in the UK and not notice the pervasive influence of class, woven into the cultural fabric of English society. Whilst the idea of an Australian classless society may be an 'egalitarian myth' , it is, as CATHERINE BURRELL argues, an important part of our shared identity and a worthy ideal.

by Catherine Burrell
in Expat Life 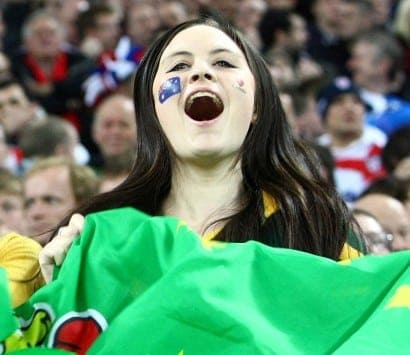 SATURDAY was Australia Day. Craving a chicken parma, I even ventured into the Glasgow Walkabout to celebrate. Sadly, the kitchen had just closed.

The day before — at the stroke of midnight AEDT, or 1pm Thursday GMT — I applied for permanent residency in the UK. (I was in Glasgow because the good people at the UK Border Agency were unable to give me an appointment near my London home, despite paying a £400 premium for the same-day service.)

I can hear (and have heard) the protesting cries: “traitor”, “pommy-loving bastard”, “bloody unAustralian, mate”. I’ve never been up for Hanson-esque flag-wearing displays of scary nationalism — so whatever, mate.

All it means is that for the past five years, with a few sanity-restoring trips home, I have been living, loving and working in the UK and I want to continue doing so for now.

There’s a lot to like about life in the UK — though perhaps not the currently controversial Life in the UK test. There’s the weather (no really); I love proper seasons and the transformative effect of the first long, warm, sunny day on everyone’s disposition. There’s the proximity to so much of the rest of the world. There’s the countryside, the history, Shakespeare (now dead), Doctor Who, the manly men who drink cider, the recessions (OK, no one likes them) and Christmas pantomimes.

Then there’s class. It’s pervasive and, I think, more than a little perverse. It’s not usually rude or even disrespectful. It’s just there, woven into the cultural fabric, all the time: little underlying judgments being made on the sound of someone’s voice, or the sports they follow, or who their great, great, great grandfather’s uncle was.

And I hate it.

Of course, for classism in the UK you could easily insert racism, sexism and/or xenophobia in Australia. Two of the biggest stories about Australia to make UK headlines in the past year were Alan Jones’s “women are destroying the joint” venom, which eventually gave rise to that speech by Julia Gillard, and the vile episode involving a French woman on a Melbourne bus. Long live the ugly Australian. I guess.

Regardless of how you viewed the 225th anniversary of the First Fleet’s arrival, on Saturday there were barbecues and protests and the Hottest 100. The prime minister may even have kicked off a shoe, or two. Many had the day off. Those who didn’t were earning penalty rates at or above a minimum wage that reflects the cost of living thanks to a relatively intact industrial relations system that never had to withstand the extremes of a three-day working week in the 1970s nor Thatcher’s retribution in the 1980s.

Then again, I doubt even the stevedores and John Howard would have let their industrial clashes of the 1990s go that far. It would fly too far in the face of Australians’ sense of a fair go.

Australia is not an equal society. Indigenous Australians can expect to live about 11 years less than non-indigenous Australians. Wealth gaps are growing — and the rich are getting richer faster. Sudanese refugees seem to be the latest target for the sort of hate experienced by previous waves of immigrants.

Yet somehow, despite these ugly divisions, there really is a sort of cultural egalitarianism in Australia that manages to include everyone. It is the best thing going in the land of Oz and the reason I will always be Australian. There’s nothing like it in the UK. Sure the idea Australia has a classless society is a myth — the egalitarian myth— but it is part of our shared identity.

It is probably why Australia, in fifth place among the world’s richest nations for the widest income inequality between the richest and poorest 20%, had better social outcomes than the UK in fourth according to The Spirit Level. Despite a large and growing income gap, authors Richard Wilkinson and Kate Pickett found Australia did comparatively OK on UNESCO’s child wellbeing index and good on maths and literacy scores.

But there is an, apparently inadvertent, attempt to codify class in Australia, which would be bloody unAustralian, mate.

The draft anti-discrimination bill currently before the federal senate has a lot of good things in it, even if it does largely exempt religious bodies from having to follow the law. However, it includes “social origin” as a grounds for discrimination.

I share NSW Community Relations Commission chairman Stepan Kerkyasharian’s concern about this. He told The Australian recently: “It’s going to codify a class structure which is totally against the whole concept of our egalitarian society. To make a complaint that I’ve been discriminated against on the grounds of my social origin… I have to identify myself as belonging to a particular social class. That is a very dangerous precedent.”

Indeed. Besides, how are most Australians to do that? We are all boat people, to steal from Bob Hawke, and most of us are mongrels of various races, old world nationalities and, dare I say it, classes.

Australia Day 2013 was my first with a new immigration status in this humorous, currently freezing, rather polite, but thoroughly class-riddled society.

It was not UK Day, if such a thing existed. It was not about patron saints slaying dragons or holding off Normans or driving out snakes. But like St George’s Day in England, St David’s Day in Wales and St Patrick’s Day in Ireland, Australia/Invasion/Survival Day is about national myths, legends and identity.

As far as I’m concerned, people can keep their flag-waving and “Australia is the best country in the world” chest-thumping to themselves. Or not. They can sit, or lie down, or dance while the national anthem plays, be it Advance Australia Fair or Waltzing Matilda or I am Australian. Change the date of Australia Day to something less divisive, if that’s what people want. Why not 2 January? New Year’s Day occupies the anniversary of the date modern Australia came into being in 1901, but we could give everyone the next day off too. Better yet, if folks could agree to it not being held in summer, go for 27 May— the day in 1967 when 90.77% of enfranchised Australians agreed to extend the vote to Aborigines and Torres Strait Islanders — or, best of all, 10 August when it became law and Australia finally had full universal suffrage, a real fair go for all.

But do not mess with egalitarianism. Myths are not reality. They’re about ideals. And as far as they go, that Jack is as good as his master is not a bad one. It’s something everyone, regardless of “social origin”, can share. And it is far more likely to help Australia get over, or at least lessen the impact of, its social and economic divides than the idea that a man slaying a fire-breathing beast will ever help England, where classism is most pronounced in the UK, get over its.